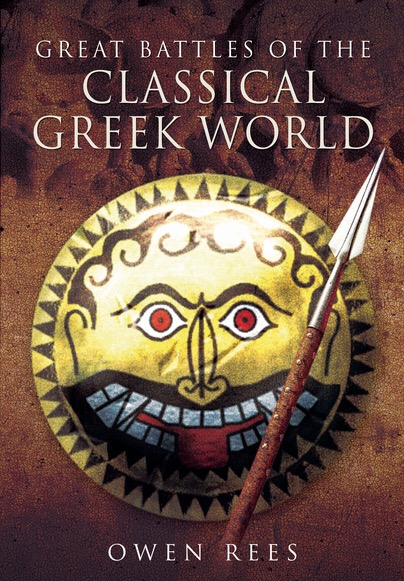 How many Battles of Ancient Greece could you name? Maybe Marathon, possibly Nemea, the siege of Syracuse?

Well Manchester author Owen Rees has written about eighteen in a new book out Great Battles of the Greek Classical World published by Pen and Sword.

Owen is a historian educated at the universities of Reading and Nottingham and is currently working towards a PhD at Manchester Metropolitan University and his book forfills a desire to teach the reader more about Greek Warfare.

We many erroneous preconceptions about the battles between the great city states or Polis of the classical world as Athens, Sparta, Corinth and the other cities fought out campaigns aimed at colonisation and ascendancy on the peninsula.

The greatest was that the battles were dull and attritional, but in fact, says Owen, there were masters of tactics, the element of surprise being one of the greatest whike the Spartans would extend one end of their battle lines to form a L shape effectively boxing their enemy in, while some saw the first prototypes of the flame thrower, a tree hollowed out with a metal tube inserted through which flames from burning coals were propelled at wooden ramparts by bellows.

While far from being clad in the heavy armour that we see portrayed in the films, the warrior would sacrifice much of his metal plating in order to gain mobility.

Against the Persian army says Owen, the Greeks really should never have won, the Persians were more mobile and used cavalry but the Greek’s topography gave them the upper hand, with their enemies boxed into the valleys.

Only the advent of the Macadonian army of Philip would end the Greek hegemony on the battlefield, he would exploit the use of warriors on horseback and when the Roman army arrived, their version of warfare would destroy that of Greece.

This book presents a selection of eighteen land battles and sieges that span the Classical Greek period offering a wider perspective on the classical battle, including mercenary armies and the rise of the light infantry. Each battle is set in context.

The background, battlefield, and opposing forces are discussed, before giving a narrative and analysis of the fighting. The text is supported by dozens of tactical diagrams that show the deployment of troops and the various phases of each battle. Written in an accessible, narrative tone, a key feature of the book is the author’s choice of battles, which collectively challenge popularly held beliefs such as the invincibility of the Spartans and the ineptitude of the Greeks at Sieges.

This book should fascinate any military/ancient history enthusiast but should also have value to those wishing to develop a more general interest in the ancient world.