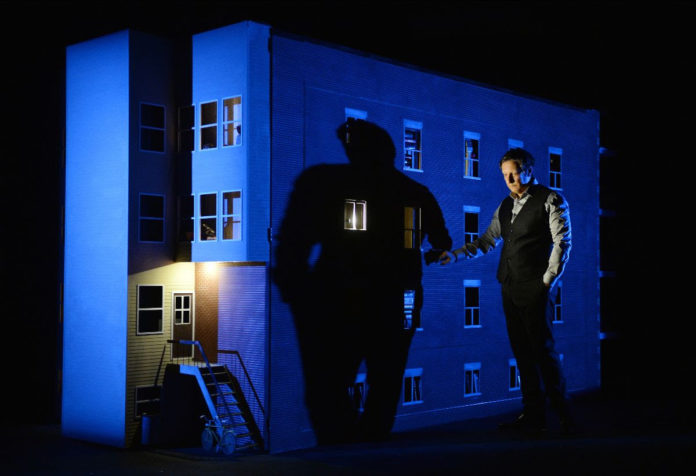 The Lowry in Salford is one of only two UK venues that will play host to Robert Lepage’s acclaimed production of 887. Lepage is one of the most influential theatre makers of our time and his rare visits to the UK have become international cultural calendar highlights.

‘887’ will play at The Lowry on Wednesday 18 and Thursday 19 March. This will be Lepage’s second visit to The Lowry following his premiere visit in 2005 with ‘Dragons Trilogy’.

This autobiographical show takes its name from Lepage’s childhood apartment building: 887 Avenue Murray in Quebec City. It tells Lepage’s story from his early years growing up in 1960s Quebec amidst the rise of the The Front de libération du Québec, Lepage constructs a life’s worth of stories, questioning the underlying mechanisms and relevance of certain memories.

Why do we remember the phone number from our youth yet forget our current one? How does a childhood song withstand the test of time? Revealing the historical and social realities that shaped his own identity, and that of his native country, ‘887’ also reflects on the nature of personal and collective memory and the people and places that fade over time.

A spectacular set design, a series of folding boxes, scale models, and video projections, create Lepage’s unique memoryscape on stage. A model apartment becomes a physical representation of the well-known ‘Memory Palace’ memory technique with specific locations within the apartment triggers of information and memories.

Steve Cowton, Head of Theatre Operations at The Lowry, said: “I saw the show at The Edinburgh International Festival in 2015 and I’ve spent the last five years negotiating and working to persuade the team behind the production to bring it to Salford. Robert Lepage’s visit will be one of only two UK appearances this year, so this really is something special.
You can expect a magical evening that will be a truly unique, unforgettable and uplifting experience and a rare chance to witness a true theatrical masterpiece from a theatrical master.”

Born in Quebec, it was Robert Lepage’s 1985 production ‘Dragons Trilogy’ which established his reputation as a master of theatre. In 1994 he founded his own company, Ex Machina, and has gone on to create a series of extraordinary productions that are truly unique in their scale, vision and ambition, cementing his global reputation as a master of theatre and winning him a raft of international awards.