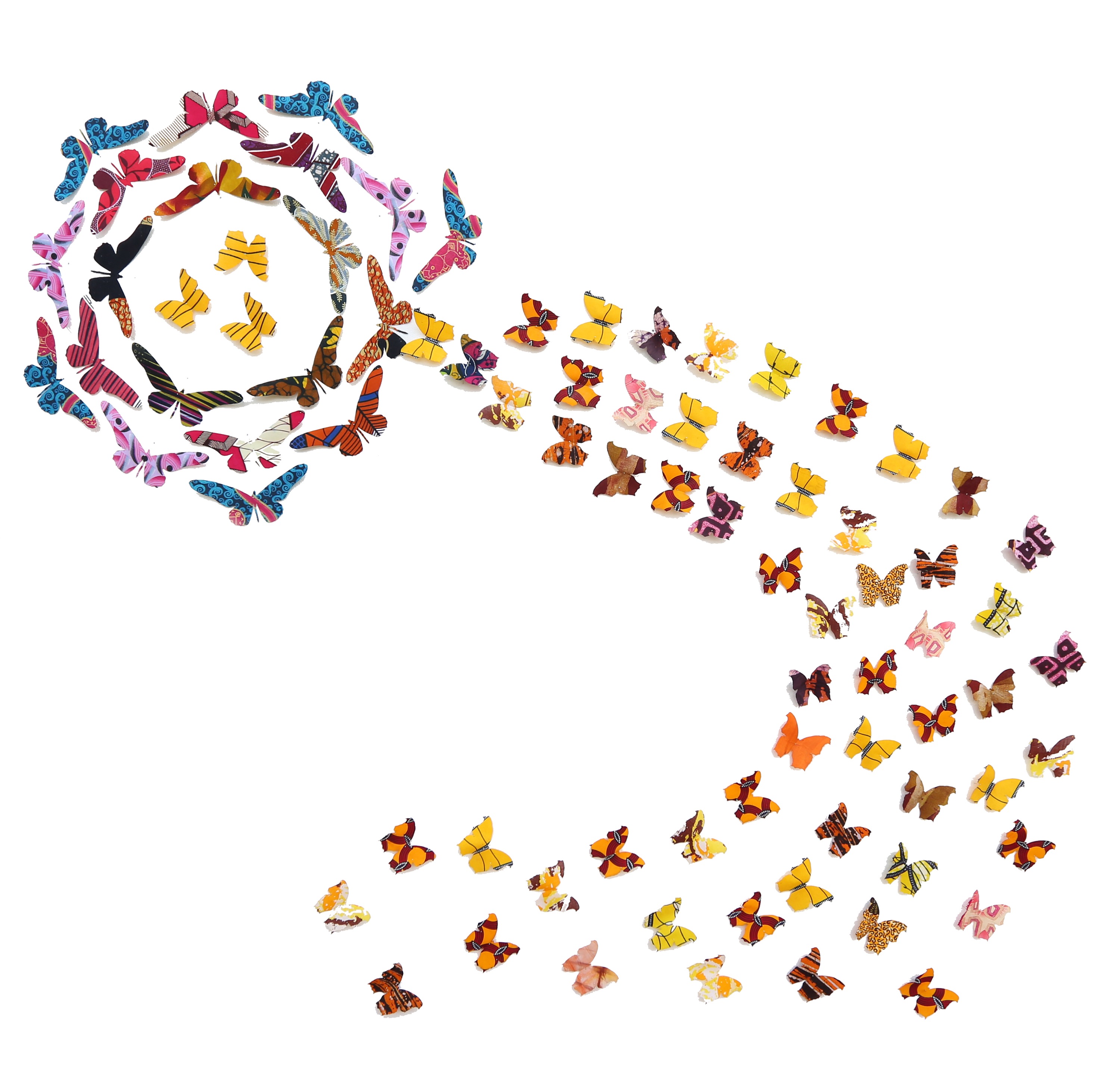 A striking new art work by one of Africa’s foremost contemporary artists, Romuald Hazoumè will be opening in Manchester later this month.

Dance of the Butterflies features swarms of multicoloured ‘butterflies’ which will take over Manchester Museum’s Living Worlds Gallery, interacting with the Museum’s natural history collections.

The hundreds of butterflies are made from off-cuts of vibrant African wax-print fabrics from the artist’s home country of Benin with the installation representing a very African take on politics, exploitation, biological mimicry and the ‘butterfly effect’, the way in which tiny impulses within chaotic systems can lead to unexpectedly serious effects.

The display opens on Saturday 14 February to coincide with the reopening of the Whitworth, following a £15million redevelopment. Romuald Hazoumè will give a talk at the Museum on 14 February, 3pm (free, drop in).

The fabrics Hazoumè uses for Dance of the Butterflies have unexpected links to Manchester’s industrial past as a centre for cotton manufacture. Although regarded as quintessentially African materials, ‘African’ wax-print fabrics have historic links with 19th century European manufacturing, with competing Dutch and English companies vying to develop a West African market for their own industrially printed cotton fabrics.

The Western entrepreneurs produced an ever-increasing variety of printed patterns that were specifically designed to appeal to African tastes. One of the dominant brands of colourful cotton wax-print fabrics came from the ABC Wax Company of Hyde in Manchester, which in its heyday was exporting some 20 million yards of wax-print fabric to West Africa each year.

In Africa, the production of indigenous fabrics, and the traditional weaving and dyeing processes upon which they depended, was severely damaged by this invasion of foreign mass-produced fabrics which deliberately imitated the motifs of traditional African textile designs.

Hazoumè’s Dance of the Butterflies captivates not only because of the beauty of the individually crafted butterflies, but also because it suggests a more complex political and social message.

The individual butterflies come together in groups to suggest resemblances to other natural forms such as a shark, a dove, a vulture or a crocodile. For Hazoumè, these animal forms combine to mimic characteristic political ‘types’ in Africa and elsewhere in the world, those larger-than-life characters who represent the wishes of the multitudes who follow them and whose actions may have far-reaching consequences for all.

Dr Nick Merriman, Director of Manchester Museum said, “I am delighted that Romuald Hazoumè has created this very special long term installation for Manchester Museum. 2012’s very successful We Face Forward season resulted in the development of new relationships between artists, galleries and museums in Manchester and West Africa. This project allows us to continue those relationships, whilst also giving a fresh and interesting perspective on the Museum’s wonderful collections and highlighting links with the city’s industrial past.”