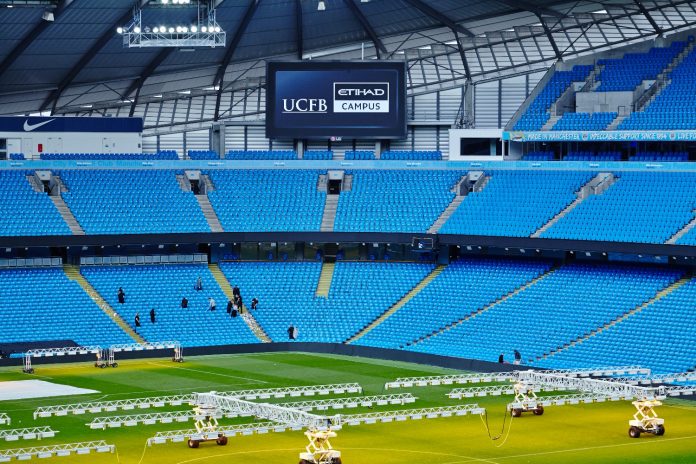 UCFB has announced its ambition to expand its footprint in the city of Manchester following the ongoing popularity of its university degrees at its north-west home, UCFB Etihad Campus.

The ambition to expand the university’s offering in Manchester comes after the football educator got the green light for an £80m expansion of its facilities around its Wembley Stadium base in London last month.

A world first concept in higher education, UCFB delivers university courses in the football business and related industries from campuses with iconic stadiums at their heart. UCFB Etihad Campus – which is the institution’s staff headquarters and Manchester base – hosts many of its classes inside the East Stand of the Etihad Stadium.

UCFB founder Brendan Flood said: “UCFB is going from strength to strength and as such expanding our footprint in Manchester is an essential next step to cater for the demand that we are receiving from both students and the football industry for our degree programmes.

“Year-on-year growth in student applications continues to be phenomenal at UCFB Etihad Campus.

“The popularity of our football degree programmes and exceptional learning environment at Etihad Stadium and beyond is clear, so accommodating for future growth within the city is our top priority.

“UCFB has embraced being part of Manchester and is showing its commitment to the region through our intention to grow our facilities in the future, which will be important for young people as they look to progress and reinforce Manchester’s position as a global sporting hub and education city.

Flood, a director of Burnley Football Club, said rafts of students are flocking to UCFB to study its innovative undergraduate and postgraduate degrees, with significant double-digit annual growth anticipated following the most recent round of university applications.

Flood, originally from Rossendale and one of the founding owners of North America MLS side Orlando City SC, said: “By 2030 we want to see a campus on every continent and alumni of 15,000 UCFB students globally.

“After launching UCFB less than seven years ago in Burnley with a cohort of 60 students, we have since become the largest football educator in the world – with almost 2,000 UK students.

“Given our offer within the marketplace there’s no reason why our ambition of reaching 15,000 students won’t materialise.”

Flood, whose UCFB ethos centres on ‘professionalising young people’ across both football and sport, said that the £80m expansion at its Wembley campus will boast an additional 680 student beds and 50,000 sq ft extra academic and commercial office space.

“We are able to expand at Wembley and will soon do the same in the city of Manchester because we are a knowledgeable team of intelligent professionals that know how to deliver,” said Flood.

“The statistics speak for themselves – 92% of UCFB graduates are in employment or further education within six months of graduating with almost two-thirds working in sport, which is unparalleled within the industry.

“That and the fact we secure over 1,000 student placements in the football and sports industry per year is something all 175 UCFB staff are very proud of.

“UCFB’s offer appeals to a passion that exists among sportspeople and those who want to make a career in the media as well as those who have a real yearning for innovation and entrepreneurship.”

“We have a job to do that consists of developing students and offering insights that enable them to be the best that they can be.”

Paying tribute to Manchester and its growing student population, Flood said: “When it comes to Manchester, credit must go to Manchester City Council for its leadership qualities and creating a location where national and international bodies reside.

“We want to discover the talent in each person, open students’ minds into the possibilities of going beyond their comfort zone, so they can become great practitioners in the industry and great entrepreneurs around the world.”