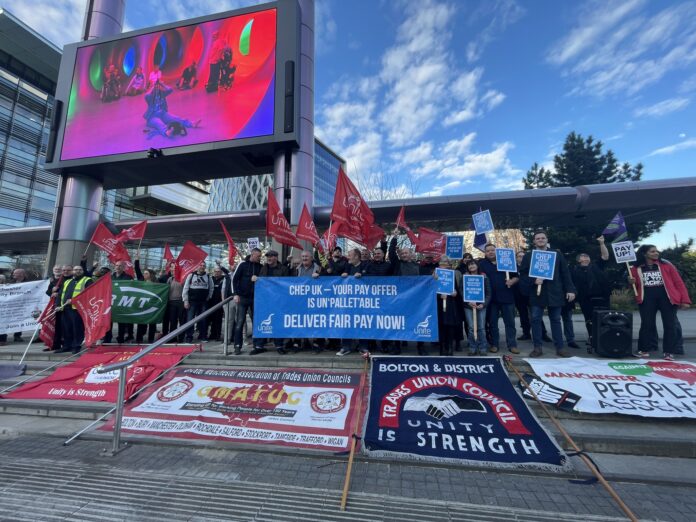 Workers at pallet suppliers Chep UK at Trafford Park have today  rejected the company’s latest pay offer, which means that the five-month long strike could continue into the summer, Unite the union says.

Unite’s members rejected the offer, which is well below inflation, as ‘totally inadequate’, as the RPI rate of inflation soared to nine per cent.

The rejection followed a march to the picket line last night attended by 200 of supporters. The union, which has a mandate to strike until 19 May, will now ballot members in a third ballot for further strike action beyond that date.

Unite general secretary Sharon Graham said: “Chep is a very profitable company. It can easily afford to pay properly. With household bills going through the roof, management needs to get serious and come back with a pay rise, not a cut in living standards.

“The workforce has the full support of Unite as they prepare to vote in their fight for pay justice, which could see strikes continuing into the summer.”

Unite’s members at Chep will be balloted from Thursday 21 April until Thursday 5 May to continue their industrial action. A yes vote will see strike action continue beyond 19 May.

Unite regional officer Ian McCluskey said: “Our members have been on continuous strike since 17 December for a decent pay rise from an employer whose profits soared during the pandemic. I would like to praise the solidarity our members have shown during their five-month strike.”

Chep UK, which is based in Trafford Park, Manchester, repairs and supplies pallets for supporting and transporting goods to a host of prominent companies including InBev, Heinz, Heineken, A&B Containers, Encric and TDS.

Manchester’s Deaf Centre receives the gift that keeps on giving

More than a third of prisoners at Forest Bank feel unsafe as violence doubles...