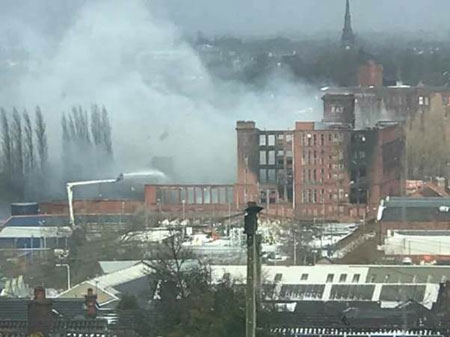 Ray Mill in Stalybridge is to be demolished after it was ravaged by a fire which started on Saturday night.

Most of the fire was extinguished this morning however the root of the fire – although under control – remains deeply embedded in rubble at the site in the Clarence Street and Tameside Street area.

Due to the extensive damage caused by the fire, the building is now structurally unsound and contractors are on site and working closely with Greater Manchester Fire and Rescue Service and Greater Manchester Police to undertake demolition work.

A Tameside Council spokesperson said: “We wish to extend our thanks to those who worked extremely hard in very challenging conditions to bring the fire under control and to ensure the safety of the public, particularly Greater Manchester Fire and Rescue Service.

“We also want to recognise the efforts of those who have worked throughout the night to ensure that 80 bus vehicles could be removed from nearby transport depot to ensure that disruption to public transport is minimised. As The Council’s main operational depot is next to the seriously damaged building, we will make all possible efforts to ensure that key services such as gritting and waste collection continue and to minimise disruption, this will be dependent on building surveys and safety considerations.”

Greater Manchester Fire and Rescue have begun an investigation into the cause of the fire.