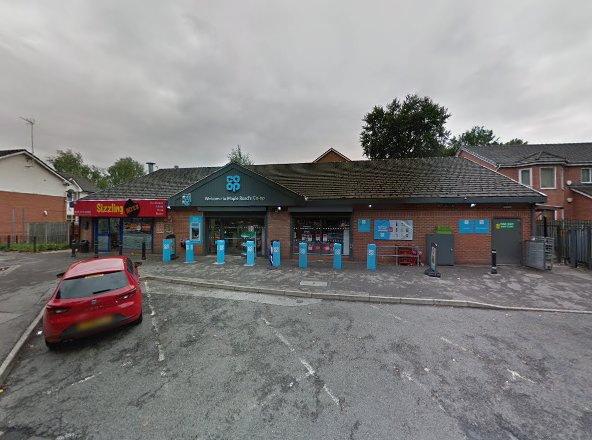 An armed trio held staff and customers at gunpoint during an armed robbery in Brooklands yesterday evening at the Coop on Maple Road.

Four men – armed with a suspected gun and a hammer – entered the convenience store and proceeded to threaten members of staff and customers whilst demanding cash from the tills.

The robbers – who were all dressed in black – fled on foot with a quantity of cash and cigarettes along Maple Road towards Wendover Road.

The offenders then got into a vehicle and left the scene.

Specific details of the car are not known but police want to speak to anyone who saw a silver Nissan Micra or a Light Blue Audi in the area at the time.

Officers attended and a scene remains in place as enquiries are carried out.

Detective Sergeant Tim Berry, of GMP’s City of Manchester division, said: “Thankfully no-one was injured during this incident but several people who were in the store at the time have been left incredibly shaken at the hands of these men.

“We are reviewing CCTV footage and are collating witness statements as part of our enquiries but would urge anyone who saw a silver Nissan Micra or a Light Blue Audi or anyone acting suspiciously in the area last night to get in touch with us.

“We are determined to find the men responsible so if you have any information that could assist our investigation, please call police.”