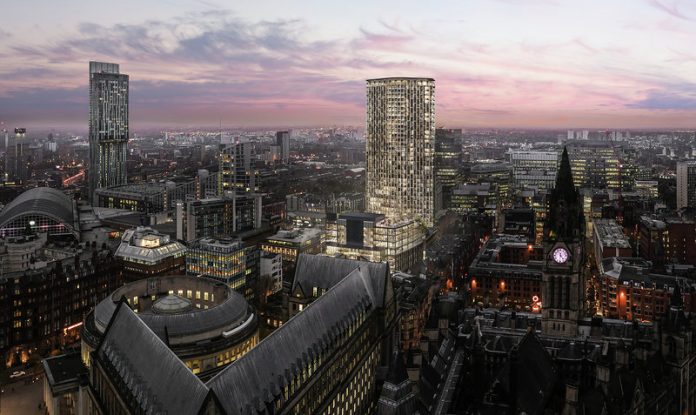 The St, Michael’s Partnership has announced that it has refreshed its existing planning application which was first submitted at the start of this year.

Over the past 8 months the St, Michael’s Partnership and their architects Hodder + Partners have taken on board comments made on the original proposal and have been working closely with Historic England on a revised masterplan proposal.

Two public consultation events have been held as well as engagement with a range of stakeholders to seek their views on the latest façade redesign.

The public consultations saw a significant turnaround of opinion say the team with 84% of responses to the revised scheme provided positive feedback while around just 10% opposing it.

The original plans which were criticised by Historic England were put on hold earlier this year and the scheme’s original architects Make were replaced by Manchester-based Hodder and Partners.

On behalf of St Michael’s Partnership, Gary Neville says: “It’s been a long journey, yet throughout it we have always strived hard to achieve our original vision; to create an international attraction unique to Manchester which provides a level of service unseen within the city. I am delighted and excited to be moving this fantastic project forward.”

Stephen Hodder of Hodder + Partners says: “The proposals seek the much-needed regeneration of this part of the city centre, so close to the civic core. If approved, Jackson’s Row and Bootle Street will be revitalised, and provide a destination in their own right. The refurbished Sir Ralph Abercromby pub will front onto a new square, which will provide new amenity space, and the residential tower will be a dynamic addition to Manchester’s developing skyline. St. Michael’s will become a ‘go to’ destination for all at the heart of the city.’

The application has now been issued to the Local Planning Authority for consideration. As the statutory consultation period will include the Christmas holidays the St. Michael’s Partnership has agreed with the Council to extend the normal 21 day period for comment until January 31st 2018. This will ensure that all interested parties will have the fullest time to prepare and submit their comments on the proposal.