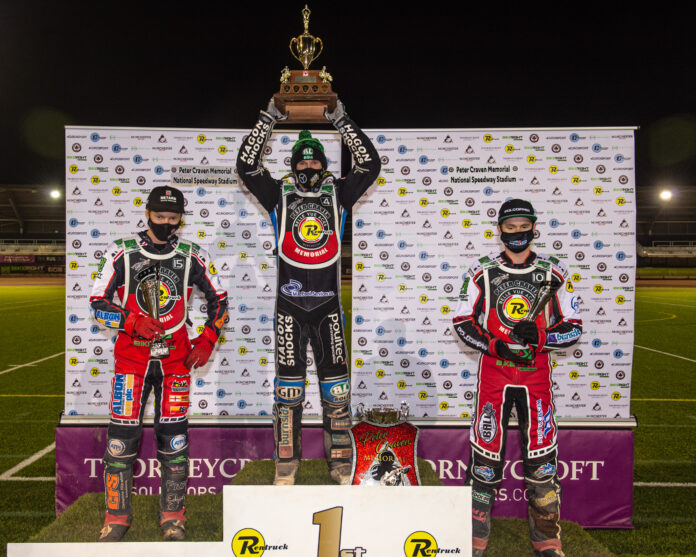 Jason Doyle made Belle Vue Speedway history when he became the first rider since the inaugural Peter Craven Memorial in 1967 to win the meeting on three consecutive occasions.

The 2017 World Speedway Champion top-scored in his qualifying heats, bagging 14 points of a possible 15 and dropping his only point to BikeRight Aces No.1 Brady Kurtz in Heat 12.

This year’s winner was decided by way of a 6-man grand finale similar in style to the Czech Golden Helmet in Pardubice; this format is a first for the National Speedway Stadium.

Doyle, along with Kurtz and Sam Masters, were the first confirmed finalists in with a shot at the historic silverware before a 5-man Last Chance Qualifier decided the remaining three.

Newly crowned British U-21 Champion Dan Bewley blitzed the competition to book his place in the final, with 2020 British Champion Rory Schlein and Richard Lawson in hot pursuit.

But the night belonged to Doyle and his victory in Manchester firmly seals his place in Belle Vue history as a triple victor in the 2020 ‘Rentruck’ Peter Craven Memorial.

“It couldn’t have been a better end to the season for me. I was a late addition to the meeting, but I’m delighted to have had the opportunity to take part on a fantastic night. It’s been a tough year for everyone, especially the boys that have been riding in Europe, and for me to win three Peter Cravens on the bounce is just amazing.

The 6-man final was quite interesting. I don’t think it’s ever been done at Belle Vue before, but the boys got stuck in, we rode safe and it was a thoroughly enjoyable meeting.”

Doyle was also full of praise for the Belle Vue management who, after putting it to the vote with the fans, pressed ahead with the 25th staging of the Peter Craven Memorial.

“Hats off and congratulations to Belle Vue for all of the effort they have put in, not just for getting this meeting on but also for the British Final and all their other meetings. It’s always a great night’s racing here in Manchester and I hope all of the hard work put in by Lemo [Mark Lemon] and the management has garnered the support they deserve.”

Belle Vue’s Dan Bewley and Brady Kurtz claimed second and third on the night respectively, and with that, the 2020 British Speedway season has officially come to a close.

The Game is on for the Aces

Master of the elements