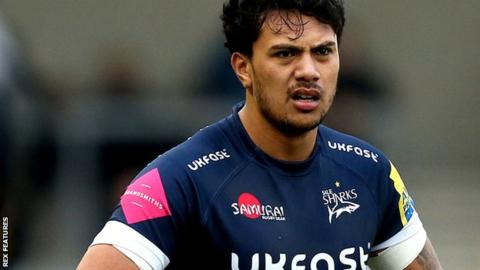 Sale Sharks winger Denny Solomona has pledged his long-term future to the club by signing a new four-year contract.

The exciting England star has made a huge impact with the Sharks since switching codes from Rugby League and signing for Sale from Castleford in December 2016.

In a superb first season with the Sharks, Denny ran in 11 tries in just 15 appearances to become an integral part of director of rugby Steve Diamond’s ambitious vision for the club.

That magnificent form earned Denny a call-up to England’s tour to Argentina last summer where the 24-year-old continued his stunning impact on Union by scoring a magnificent last-minute try in the first Test to earn Eddie Jones’ side a dramatic 38-34 win.

So far this season, Denny has carried on from where he left off last term and, to date, he has scored seven tries from 14 Premiership appearances, including a superb brace of scores in last weekend’s clash away at Bath.

He subsequently moved to the UK in 2014 and continued in the 13-man code, signing for the London Broncos where he scored 10 tries in just 21 games. Denny then moved to Castleford Tigers and in 2016 broke the Super League try-scoring record for a single season by claiming 42 tries.

Since joining the Sharks, Denny has maintained that devastating form and the confirmation of his new deal is further demonstration of both Denny and the club’s long-term ambitions.

“I really pleased to have signed an extended contract with Sale, there couldn’t be a better environment for me to play my rugby. Dimes and all the coaches have all been great and Im very excited about the future here with a great bunch of guys.

We are in fine fettle says Shark’s coach as new premiership season kicks off...