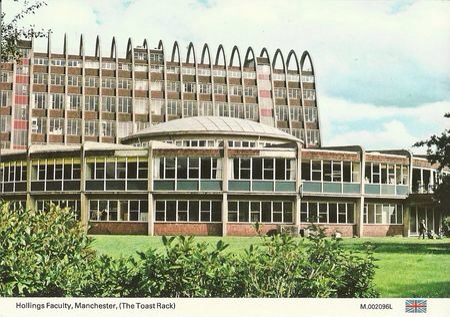 The grade II-listed and much loved ‘Toast Rack’ building on Wilmslow Road has been sold.

It was first opened in 1960, officially opened in 1962 by Princess Margaret and designed by city architect Leonard Cecil Howitt who also designed Manchester Crown Courts of Justice and Blackley Crematorium.

The Domestic & Trades College, or the Hollings Faculty of Manchester Metropolitan University was used for courses in food, clothing, hospitality and tourism and and quickly given its famous nickname after a series of concrete loops across the top of the main building.

It was much derided, architectural historian Sir Nikolaus Pevsner proclaimed it as “a perfect piece of pop architecture”

Its tapering shape provided different sized teaching spaces for small or large classes and beside the main building there are tailoring workshops which were kept separate to minimise noise from the sewing machines,

There is a legend that in the 1970s students made a giant slice of polystyrene toast and stuck it on the roof for rag week. There is an adjoining building which being small and round is known as The Fried Egg.

The new owners are Estrela Properties and there are rumors that it might be turned into flats.