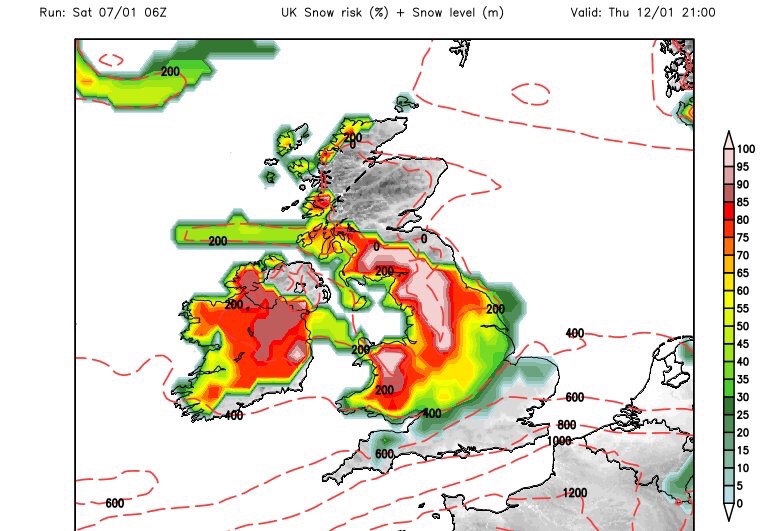 Snow and freezing temperatures could be heading to the region by the end of the week.

Europe has already been plunged into a cold snap with snow falling in Instabul and temperatures of below -30c being recorded in some Central European Capitals while people have been cycling along Moscow’s frozen river.

Now the cold snap could be heading to the UK  after a cold northerly wind hits parts of the country on Wednesday evening and from Friday the whole of the country could see freezing storms bring two to four inches of snow.

Snow showers are expected to develop from Wednesday evening lasting into Thursday. These, combined with strong winds, could lead to locally very poor travel conditions. Be aware of the potential for disruption to transport due to lying and blowing snow.

Cold air originating over Arctic Canada will affect the area from Wednesday evening through Thursday, bringing snow showers and strong winds. Wind gusts up to 55 mph are expected in exposed coastal areas and on hills in association with snow showers, leading to temporary blizzard conditions. As well as reduced visibility, 2-5 cm of snow could accumulate anywhere within the warning area, with 10-20 cm possible above 300 m. Lightning may accompany the heaviest showers, with potential disruption to power supplies as a consequence.

For those interested in Meteorology, it’s all down to the Gulf Stream as it moves south drawing in cold air across the country.

A plant has been found on Astley Moss, 150 years since it was last...