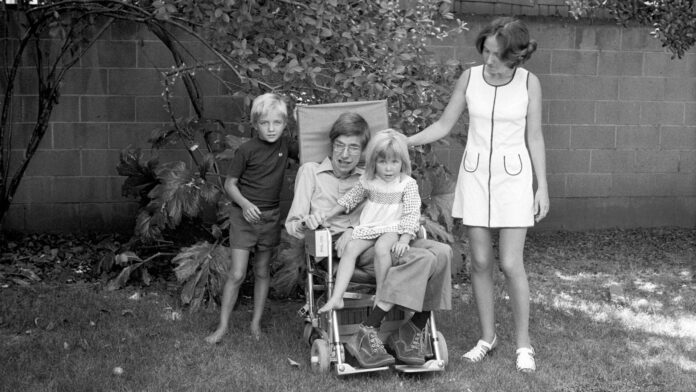 Sky has today revealed an exclusive first look image, a never-seen-before family photograph, for highly anticipated Sky Original documentary Hawking: Can You Hear Me? The 90-min theatrical documentary, which explores the remarkable human story of Professor Stephen Hawking through unprecedented access to his family and their private archives, is set to premiere on Sky Documentaries and NOW on Monday 20 September.

This never-seen-before family photograph features Professor Stephen Hawking with his then wife Jane, son Robert and daughter Lucy on their California estate in 1974.

The world-famous cosmologist, Stephen Hawking, died in March of 2018. Now his family, friends and colleagues speak candidly, for the first time, about the unseen world behind Hawking’s rise to the status of gilded genius and international icon. What was the true human cost – to himself and those around him – of his genius? This documentary explores the incredible life of this iconic physicist, but also the untold human story.

This is the story of Stephen Hawking’s life told not by historians, biographers or commentators, but by the people who were there at the time; the people in the room with him. Scenes from critical and defining moments in his life are told by the people who were present as the events and discoveries unfolded, and who were directly impacted by his triumphs and tragedies.

Contributors include Stephen’s children Robert, Lucy and Tim, and his first wife Jane, alongside a raft of renowned scientists who consider him an inspiration, a role-model, a peer, and a friend, for a fascinatingly well-rounded portrait of the scientist, the family man, and all the facets of Stephen’s life.

Anthony Geffen, multi-Emmy and BAFTA-winning Producer, said: “After more than five years collaborating with the late Stephen Hawking, and his close family and friends, and with exclusive access to their family archive, we have finally been able to tell his extraordinary story from the inside, by the people who really knew him.”