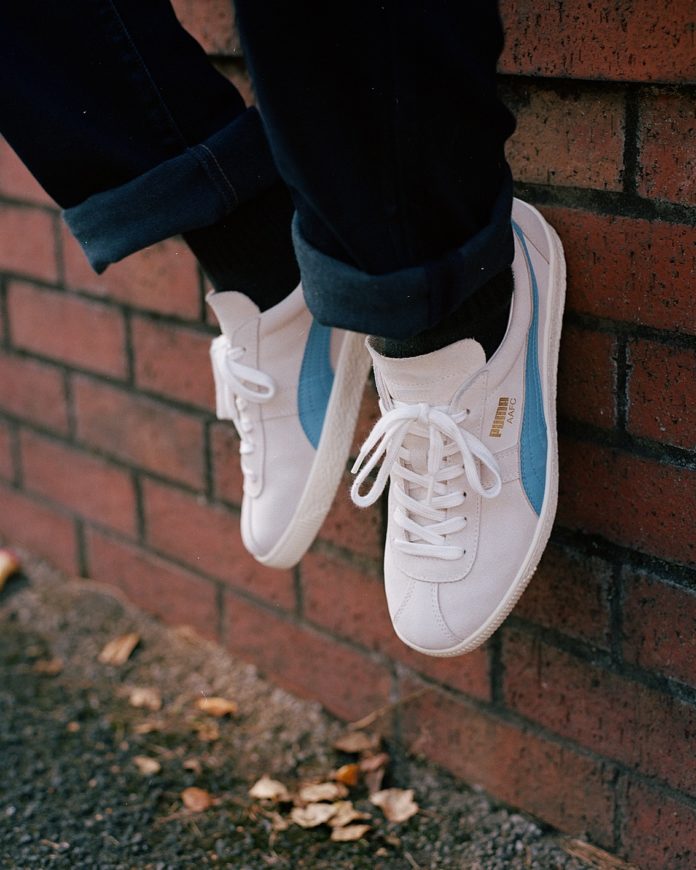 2019 marks the 125th anniversary of Manchester City Football Club, an English football club with a rich history based in the heart of Manchester.

In this spirt, official sponsors PUMA have crafted a limited-edition capsule collection. The selection fuses four pivotal stories in City’s history with classic silhouettes from the PUMA vault, dressing each rendition with detailing which honours the club’s landmark moments.

Consisting of two drops, the first from the collection lands on Friday 4th October using PUMA’s early ‘70s Crack as its canvas. Originally made in West Germany, the Crack silhouette was designed as an athletic training shoe. They featured a foot-hugging shape, soft suede uppers and a rubber outsole in the aim to gain traction to the track.

Part 1 of the first launch rewinds to 1880 when the club moved to the then newly built Hyde Road Stadium – located in Ardwick – where the club was renamed to ‘Ardwick Association Football Club’. This change of name marked the second chapter in Manchester City’s history.

PUMA pays tribute to the landmark event with a gold ‘AAFC’ brand patch to the sidewall. The Crack boasts a smooth suede upper complemented with a sky blue Formstripe branding to the sidewall, tied together with a white cushioning midsole underfoot.

PUMA’s second design honours Manchester City’s crowning moment in recent history, Sergio Aguero scoring a Premier League title-winning goal, 93 minutes and 20 seconds on the clock and deep into injury time on May 13th 2012 to clinch it from the hands of city rivals Manchester United.

This edition of the Crack comes ornamented with a gold  ’93:20’ patch to the sidewall. The left shoe is detailed with a ‘93’, while the right reads ‘20’. Sumptuous suede uppers are decorated with a purple Formstripe to the sidewall, and a custom insole is emblazoned with ‘Limited Edition No. 00/125’ – nodding to the exclusivity and limited production run of the collection.

Part 1 of the PUMA MCFC Collection, which includes the AAFC and the 93:20, will be available in men’s sizes via the size? Manchester store on Friday 4th October.

Part 2 of the PUMA MCFC Collection will unveil the Kippax and Whitworth models, coming very soon.