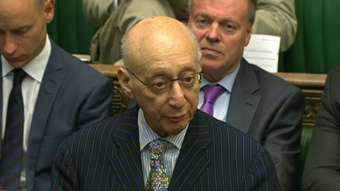 A family spokesman said: “Sir Gerald dedicated his life to serving those who he believed would benefit most from a Labour government and Labour values in action.

“He believed that policy and principle without power were simply not enough to deliver the better life that he fought for on behalf of his constituents for almost 50 years.

“[Throughout his illness], he remained firmly committed to, and focused on, the activities and wellbeing of his beloved constituency.”

Labour leader Jeremy Corbyn led to the tributes to Sir Gerald saying he was very sad at his passing:
“An iconic and irascible figure in the Labour Party, Gerald worked with Harold Wilson when he was Prime Minister in the 1960s and became a Labour MP in 1970.
“Gerald was always a prominent figure in the party and in Parliament, with his dandy clothes and wonderful demeanour in speaking.
“Gerald came from a proud Jewish background. He always wanted to bring peace to the Middle East and it was my pleasure to travel with him to many countries.
“I last saw him in his lovely flat in St John’s Wood in London, surrounded by film posters and a library of the film world.
“He loved life and politics. I will deeply miss him, both for his political commitment and constant friendship.”

Former leader Ed Miliband said: “Sad news. For decades, Gerald was an outstanding servant of the Labour movement. His principles, values & friendship will be sorely missed.”

Lucy Powell MP, whose constituency borders that of Gorton tweeted

“Sir Gerald represented the city he loved for 47 years with distinction, commitment & elegance. He was a warm, funny & honest friend. #rip”

Kate Green MP tweeted “Very sorry to hear of the death of my friend and neighbour Sir Gerald Kaufman. He will be missed in parliament and by his many friends.”