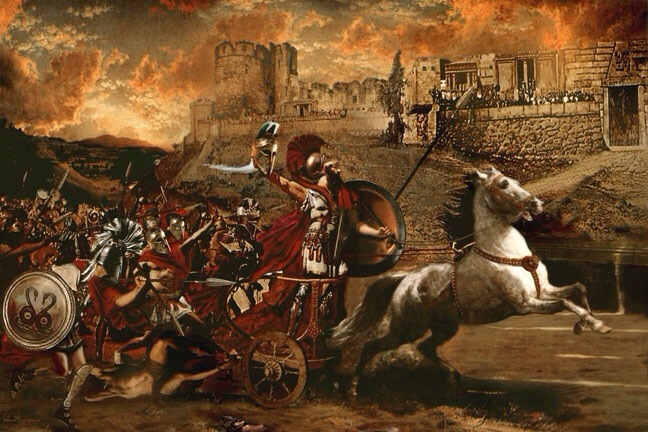 Acclaimed poet and novelist Simon Armitage interprets Homer’s and Virgil’s Greek Classics to continue the current Spring / Summer Season at The Royal Exchange Theatre from Thursday 8 May to Saturday 7 June.

The cast includes Lily Cole in a visceral and heartfelt re-telling of the story of the Trojan War.

In this fusion of The Illiad and the Aeneid, the Greeks are laying siege to the ancient city of Troy to try and win back their abducted queen Helen, reputedly the most beautiful woman in the world.

Despite battlefields dyed scarlet with blood and the local river running red, opposing forces have reached a bitter stalemate. In this tense stand-off, desperate actions lead to extreme and unexpected reactions, both on earth and among the Gods of Olympus.

At a time when the nation is commemorating World War I, it tells the story of an ancient battle, its legendary heroes and noble losers.

This new dramatisation brings the war to a brutal conclusion and considers how we are locked in the same cycles of conflict and revenge, of east versus west, and the same mixture of pride, lies and self-deception that fed the Trojan War

The production is directed by guest director Nick Bagnall, whose credits includes directing three Henry VI plays at venues across the UK, including four open-air battlefield performances. His other works include Betrayal at the Crucible Theatre, Sheffield and Entertaining Mr Sloane at Trafalgar Studios.

Simon Armitage is regarded as one of Britain’s most famous and respected poets. He has published ten volumes of poetry and has received numerous awards for his poetry including the Sunday Times Author of the Year, one of the first Forward Prizes and a Lannan Award.

His most recent book, Seeing Stars was shortlisted for the T. S. Eliot Prize and was a Poetry Book Society Choice. Other work for the Royal Exchange includes the award-winning Black Roses, The killing of Sophie Lancaster.

Oldham’s all booked up

Manchester Art Fair – Where Can You Bag Yourself a Banksy, in Manchester, This...