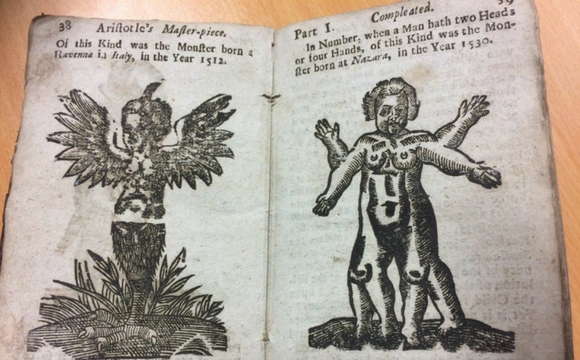 A ‘secrets of sex manual’ dating back to 1720, that was banned until the 1960s due to its shocking content, has been unearthed.

Political correctness hadn’t been invented when the nearly 300-year-old book, entitled ‘Aristotle’s Masterpiece Completed In Two Parts, The First Containing the Secrets of Generation’, was published in London.

But amid its primitive knowledge, laced with elements of religion, claims of monstrous births due to ‘women lying with beasts’, witchcraft, old wives’ tales and even astrology, there is a smidgen of romance to honour Valentine’s Day.

The book, which is coming up for sale at Hansons Auctioneers in Derbyshire in March, states: ‘Without doubt, the uniting of hearts in holy wedlock is of all conditions the happiest, for then a man has a second self to whom he can unravel his thoughts as well as a sweet companion in his labour’.

It also offers, ‘A Word of Advice to both Sexes in the Act of Copulation’: ‘I do advise, before they begin their conjugal embraces to invigorate their mutual desires and make their flames burn with a fiercer ardour by those endearing ways that love can better teach than I can write.

‘And when they have done what nature can require, a man must have a care he does not part too soon from the embraces of his wife’.

Jim Spencer, books and manuscripts valuer at Hansons, in Etwall, near Derby, said: “The first edition of this book was published in 1684 and it was as good as banned until the 1960s. 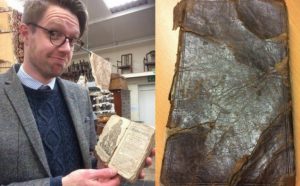 “There were several reasons for that. For example, it includes woodcut illustrations of ‘monsters’ that ‘are begot by Women’s unnatural lying with Beasts’ – an example being a woman ‘generating with a dog’.

“There are several illustrations of beast-like creatures including a man sporting a bushy dog’s tail and a monster being born in Ravenna, Italy, in 1512.

“This is blamed on ‘filthy and corrupt affection’. But you have to bear in mind that this book was written when people were still being burnt for witchcraft in Georgian England.

“The book even claims parents’ imaginations produce a child’s features and includes an illustration of a ‘maid all hairy and an infant that was born black by the imagination of the parents’.

“In fact, if women cast their eyes on ill-shaped bodies, ‘the force of imagination’ could produce a child with ‘a hairy lip, wry mouth or great blubber-lips’.

“Instead, during sex woman were urged to ‘earnestly look upon the man and fix her mind upon him.’ Then ‘the child will resemble its fat

A century after women first won the right to vote in the UK, this book takes us back to very different times. It talks of man being ‘the wonder of the world, to whom all things are subordinate’. Meanwhile women are painted as being prone to sexual indulgence.”

The book states, ‘The inclinations of maids in marriage is to be known by many symptoms for when they arrive to puberty (which is about the 14th or 15th year of their age) then their natural purgations begin to flow, and the blood which is no longer taken to augment their bodies abounding, fires up their minds to venery (sexual indulgence).

‘External causes may also incite ‘em to it; for the spirits being brisk and inflamed when they arrive at this age, if they eat hard, fat things and spices, the body becomes more and more heated; whereby the desire to veneral embraces is very great’.

However, when virgins marry and these desires are met by ‘the enjoyment of their husbands’, they become ‘more gay and lively’.

Advice is also forthcoming to produce a boy or girl. To have a boy, a woman should lie on her right after sex; to have a girl, on her left.

Meanwhile, ‘the fittest time for the procreation of male children is when the sun is in Leo and moon in Virgo, Scorpio or Sagittarius … to begat a female the best time is when the Moon is in the wane, in Libra or Aquarius’.

As regards the making of a baby, man’s seed is a ‘divine gift abundantly endued with vital spirit which gives shape and form to the embryo’.

The book even touches on pregnant women’s ‘greedy longings for things that are contrary to nutriments’ such as ‘coals, rubbish, chalk, hob-nails, leather, man’s flesh and horse flesh’.

But man’s ‘divine nature’ is not all-conquering. Errors of marriage include a younger man who, to advance his fortune, marries a woman old enough to be his grandmother.

‘The like may be said when a doting old fellow marries a young virgin in the prime of her youth and vigour, who he vainly tries to please, thereby going to his grave’.

The book, which has an estimate of £80-£120, will be sold on March 27 at a Library Auction at Hansons Auctioneers, Heage Lane, Etwall, Derbyshire