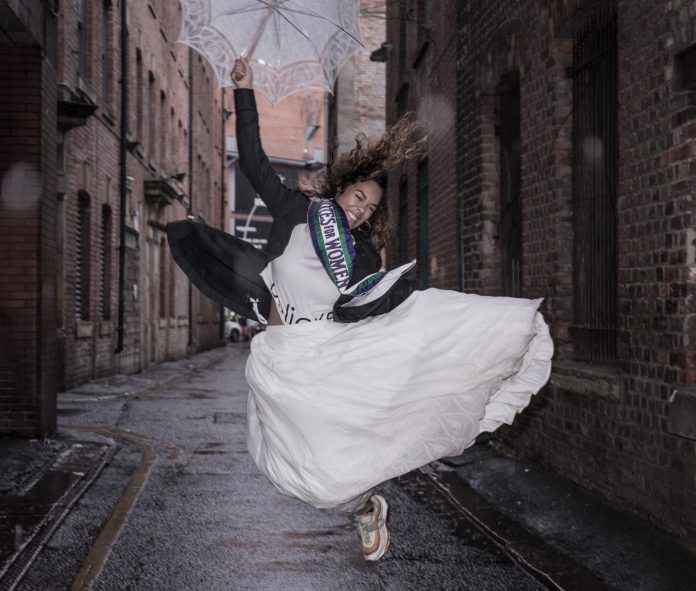 This March, the award-winning Contact Young Company celebrates the 100 year anniversary of the Representation of the People Act (1918) with She Bangs the Drums.

This much-anticipated show is based on research at the People’s History Museum and will take place in the Museum of Science and Industry’s characteristic 1830 Warehouse as part of the city’s Wonder Women 2018 radical feminist festival.

She Bangs the Drums will explore both familiar and unheard voices and stories from Manchester’s rich and radical past as a centre of protest, from the Suffragettes to the Chartists. The 1918 Act saw the vote extended to all men over the age of 21 and women over 30, but with certain restrictions.

Although not the end of the fight, this huge step was largely influenced by working class men and women from Manchester and the North West. Their passionate protest and sometimes militant behaviour brought a fight for a fairer society to the forefront of politics, affecting the social climate of the United Kingdom forever.

She Bangs the Drums has been devised by Contact Young Company following extensive research into the People’s History Museum’s archive, galleries and collection with assistance from the experts at the museum. The show has personal significance for one of the members of the company, who can count a leading figure in the Irish suffragette movement as an ancestor.

My great-great-aunt –  Hanna Sheehy Skeffington – was a feminist and an incredibly important figure in the Irish suffragette movement and her story is deeply significant to me and to my whole family. She has been a huge inspiration to me all of my life and I couldn’t be prouder to be related to her. She was one of the founder members of The Irish Citizen newspaper, which finally gave women and the suffragette movement a voice. We get so much freedom to explore ideas and create character in the Contact Young Company process; I can’t wait to bring her world to life.

She Bangs the Drums takes a fresh look at past Mancunian pride and radical thinking and explores how these events can change our perception of the future.  Contact Young Company will take the audience on a journey through the historic spaces of the Museum of Science and Industry whilst exploring Manchester’s ongoing relationship with political protest.

She Bangs the Drums has been fantastic to work on. I have seen the group delve into the PHM’s archive, collection and galleries, and fool around at clowning workshops to create some brilliant characters. It’s an exciting challenge to try and capture the revolutionary spirit of women and men who broke convention, windows and the law for our right to vote. Looking beyond the well-known figures of the period, our young actors have been seeking out people like Princess Sophia Duleep Singh, Annie Kenney and Lady Constance Lytton – who represent some of the diverse, radical and intersectional figures of the era. Contact has given its young actors space to explore not just the women’s suffrage movement but also to reflect on how far we have come towards achieving equality for women in 2018.