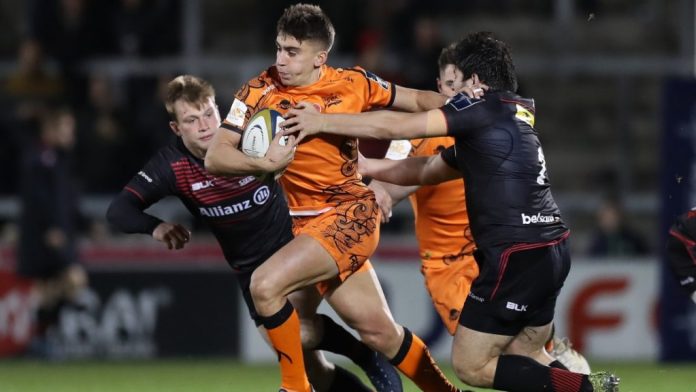 Sale Sharks trio Denny Solomona, Tom Curry and Cameron Redpath have all been included in a 34-man England squad selected for next month’s tour to South Africa where the tourists will play three Tests.

Winger Denny and back-row operator Tom were both part of the successful England squad which toured Argentina last summer where the pair both made hugely successful debuts on the international stage.

Now, after impressing again with the Sharks in the Premiership this season, the duo have been rewarded once more by England head coach Eddie Jones.

Utility back Cameron, meanwhile, has enjoyed a fine breakthrough campaign which has seen the 18-year-old son of former Sharks fly-half and director of rugby Bryan Redpath, make his Sharks’ first team debut as well as appearing for England’s Under-20s side in the Under-20 Six Nations.

He was also invited to spend time training with England’s Six Nations squad earlier this year.

In addition, Sharks forwards Josh Beaumont and Jono Ross have both been included along with Denny, Tom and Cameron, in a 31-man England training squad which will gather in Brighton next week to both begin preparations for the South Africa tour as well as England’s Quilter Cup match against the Barbarians on May 27.

For second row star Josh, it represents another deserved opportunity to press his Test credentials whilst for flanker Jono his selection caps a magnificent first season with the Sharks which has seen him take the Premiership by storm.

Eddie Jones said: “Our tour to South Africa will be the most exciting challenge for us as a group since 2016.
“We have an opportunity to create some history next month and win the Test series, something no England side has done before.
“There are a number of players out injured or not selected so it provides a big opportunity for others.”