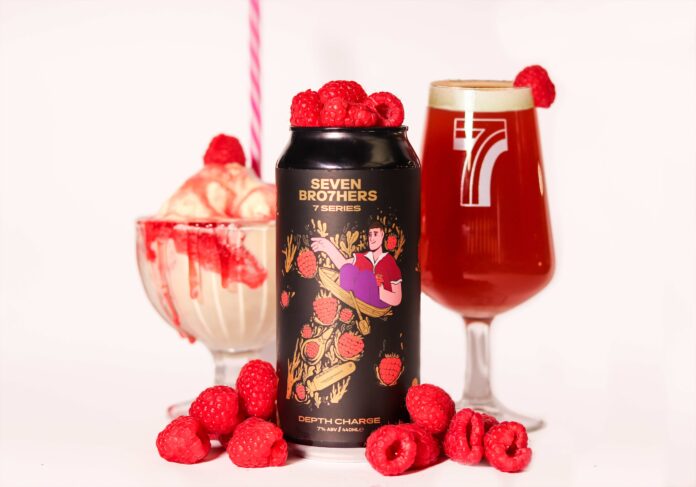 The celebration series will see each of the seven brothers launch their own unique beer to mark the July anniversary. Each beer will explore the interests, personalities, and quirks of the seven McAvoy brothers as they toast this landmark birthday.

This summery treat of a beer is 7% ABV and available in a 440ml can from the SEVEN BRO7HERS web shop for £5 – the perfect pint for a sunny May Bank holiday.

To make the celebration series extra special, the brewery has also collaborated with local artist Alexandra Francis to design the artwork for the cans – visually telling the story of each brother and their beer.

Speaking about his red IPA, Project manager for the SEVEN BRO7HERS beer houses, Nathan McAvoy, said, “I chose to make a red IPA because I love rich coloured and flavoured beers. Depth Charge has an initial sweet taste from the raspberry and vanilla flavours followed by a hoppy bitterness which is balanced by soft malty notes.

The name was inspired by friends who wanted me to make a beer and call it Depth Charge – it is a running private joke within our group, so I will leave it to your imagination, but ultimately I know it will make them smile.”

Challenge Cup final winner and former England Rugby League star added, “It feels great to have reached seven years with the business. It has been a tough seven years but also very enjoyable. It is a privilege to be able to work with my brothers and family – Here’s to the next seven years.”

SEVEN BRO7HERS BREWING CO was founded in 2014 by McAvoy brothers, Guy, Keith, Luke, Daniel, Nathan, Kit, and Greg, inspired by their dad’s home-brewing in their cellar at home.

In 2016 the brothers opened their first beer house in Ancoats, Manchester. They now have a newly refurbished, onsite taproom at the brewery in Salford and a beer house at Middlewood Locks, Manchester.

This year the SEVEN BRO7HERS will be opening a partnership bar in Manchester Airport’s new terminal two, as part of a lucrative 10-year deal. As well as beer house sites in MediaCityUK, Leeds and Liverpool.

Nathan and the brothers recently teamed up with rugby league legend Rob Burrow to launch a limited-edition charity lager to raise money for the MND association, the limited-edition beer is called ‘Road Runner’.

The Only ‘Bubble House’ we Want to be in!