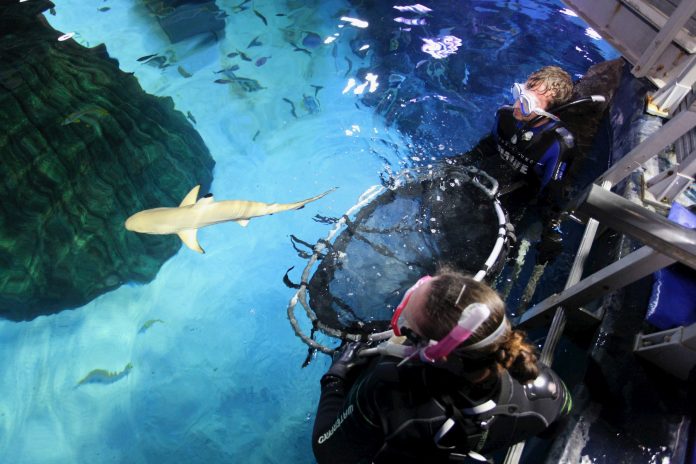 Notoriously difficult to breed, the arrival of the newest residents marks the latest in a string of successful conservation programmes for the attraction, which serves to educate and inspire visitors on marine life and the importance of protecting our oceans.

The welcome reception follows over 12 months planning and sees the baby sharks, who were all born in German Sea Life Centres, expertly transported 625 miles in specially modified tanks from Oberhausen in Germany to their new home.

The pups, weighing between 5-7kg and measuring just under 100cm, will move into Sea Life Manchester’s Ocean Tank, where they will live amongst schools of tropical and sub-tropical fish, in waters that closely resemble their natural habitat.

The pups will be joined by Sea Life Manchester’s first ever Blackchin Guitar fish, a member of the ray family known for its elongated body, flattened head and trunk, and small, ray-like wings.

Speaking on the new arrivals, Brandon Malone, Curator at Sea Life Manchester, said: “We are extremely proud to welcome the sharks here at Sea Life Manchester.  Blacktip Reef Sharks are incredibly difficult to breed and the arrival of these fantastic new pups to Manchester is testament to the Sea Life’s commitment to conservation and sustainable breeding programmes.”

Jean-Denis Hibbitt, Breeding Programmes Coordinator from Merlin Animal Welfare and Development, added: “Not only has the programme created a sustainable population of sharks in aquariums, but it has also allowed us to uncover brand new facts about their biology and reproduction – research that could help better protect them in the wild.”

Jenn McDonough, General Manager Manchester Cluster, Merlin Entertainments, commented: “Sea Life Manchester has been inspiring and educating families for many years, and the arrival of our Blacktip Reef Sharks promises to continue to do just that.

“Our expert team are dedicated not just to caring for all of our marine creatures but to sustaining them for future generations to come.  We’re incredibly excited that these seven shark pups will be calling Sea Life Manchester home.”

Largely feared & misunderstood, the popular Barton Square attraction is hoping that the introduction of the pups will help to re-educate visitors on the beautiful marine creatures which, contrary to opinion, have a particularly gentle nature.

The seven new pups can be seen in Sea Life Manchester’s Ocean Tank containing 500,000 litres of water.  When fully grown, the sharks will reach sizes of up to 1.6m. Placid creatures, Blacktip Reef Sharks can be identified by the black tips on their fins, especially on their first dorsal fin.

Blacktip reef sharks have extremely small home ranges and exhibit strong site fidelity, remaining within the same local area for up to several years at a time. They are active predators of small bony fishes, cephalopods, and crustaceans. At Sea Life Manchester they enjoy a varied diet of mackerel, saury, whiting and for a treat – octopus.