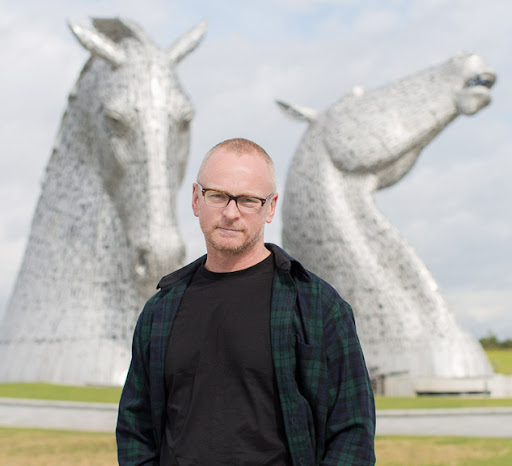 Born and raised in Glasgow and a graduate of the city’s School of Art, Scott is one of the most respected sculptors of his generation and is known for his large-scale figurative pieces, which he creates by blending traditional craftmanship with modern fabrication techniques.

His portfolio of more than 80 contemporary projects can be found both in the UK and in many corners of the world.

Now creating from his studio in Philadelphia, USA, Andy works frequently in galvanised steel and counts The Kelpies and Beacon of Hope amongst some of his most celebrated work.

Uniquely, the Kompany and Silva projects have been conducted entirely remotely from Scott’s securing the commission in June 2020, through to creation, completion and transportation of the pieces, which arrived on schedule in Manchester from Philadelphia in August 2021.

The statues of Kompany and Silva are to be installed outside the Club’s Etihad Stadium ahead of this weekend’s fixture against Arsenal, with Aguero’s tribute to follow in 2022, after his departure from the club this summer.

The legacy project was announced by Chairman Khaldoon Al Mubarak following the departure in Summer 2019 of Vincent Kompany, the Club’s most successful captain in its 127-year history.

The decision to honour the three players was based on their unparalleled contribution to the Club’s transformation over their combined thirty-one years at the club.

Al Mubarak has since indicated that further work is being undertaken to ensure the legends of earlier eras are appropriately celebrated.

Speaking of his appointment to the project Andy Scott said: “On hearing that I had secured the commission to bring Vincent, David and now Sergio to life in sculpture form, I was absolutely thrilled.

“It’s an unbelievable honour to work on something that will be visited by hundreds of thousands of fans as they remember and celebrate the achievement of their footballing heroes.

“I have always been struck by how sportsmen and women move and perform, and in the case of football specifically, how they anticipate the ball, how they combine with their teammates, and sometimes simply how they stand.

“Reflecting these elements was always going to be challenging, but it was particularly so during a global pandemic as we were only able to meet with Vincent and David virtually.

“But with their insights and extensive research of film and photographic footage, I have tried to capture their unique physical characteristics and their distinctive movements in a way which I hope does justice to both of these phenomenal footballers.

“It’s been such a pleasure to work on this prestigious project and I can’t wait to finally get to meet the team in person as we set about the final installations at the Etihad Stadium this week.”

City Chairman, Khaldoon Al Mubarak commented: “We are delighted with our choice of Andy to bring this project to life.

“His portfolio speaks to his expertise, and his contemporary approach, together with his chosen medium of industrial materials, made him the perfect fit to create artwork for Manchester City.

“Ultimately, Vincent and David do not need statues to enshrine their achievements at Manchester City over the past decade. They are already revered as icons of their generation.

“But what these artworks give us, and generations to come, is the opportunity to be reminded of, and savour, the truly magical moments created by both men.”

Leader of Manchester City Council, Sir Richard Leese said: “City’s decision to commission the statues of their iconic players and the appointment of Andy Scott to deliver them, is such an exciting development for our city.

“The benefits of public art are well accepted and in addition to the cultural and aesthetic advantages that come with high quality artwork, it can also generate significant economic value for the city.

“I have seen Andy’s work and I’m thrilled that Manchester’s landscape will be blessed with new artwork from someone of his standing and whilst naturally, these pieces will be of appeal first and foremost to Manchester City fans, it is clear that this calibre of artwork will be admired and respected by millions around the city and beyond.”