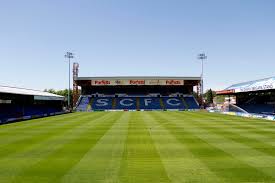 The 2016/17 figure has been boosted by increased tickets sales, commercial revenue and success on the pitch, including healthy cup runs. They have also seen increases in lottery revenue and merchandise sales through the club shop, as well as the conclusion of significant historic payments.

In addition, there has been a significant year-on-year improvement in the balance sheet of £410,000. This figure includes an element of debt conversion by the main active shareholders to equity (shares), marking the start of a process which was promised once the right stable financial structures were in place.  Over the last two years, the club has improved its balance sheet by £926,000.

The improvement in the club’s finances has allowed the club to invest further in the club’s full-time staff by increasing the strength of our commercial team this summer.

Stockport County Chairman Richard Park said: “The fans have played a huge part in helping to make this improvement and going forward we have sold just under 1700 season tickets for this current campaign, well up on the 1458 we sold last year.

“Our costs are under robust control and our playing budget has been significantly increased once again. Despite the improvements, we are not going to rest on our laurels – the target remains to achieve promotion alongside a profitable, self-sustaining business which helps to generate additional funds for the playing budget, but the significant uplift over the last two-and-a-half years is a cause for celebration.  I am grateful to my Board of Directors and the active shareholders – all County fans – who have helped to put controls in place and make such a marked improvement in our balance sheet.”