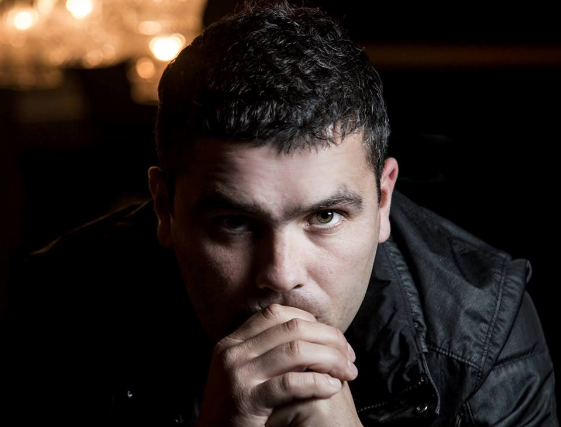 ARGH KiD is the band from renown spoken word artist David Scott, fusing hip-hop with punk, jazz and ska samples. The “Acapella Eminem” is the Official Poet for the NSPCC, UEFA and Manchester United and his work has been broadcast to homes across the globe. Scott talks about how life in austerity UK with all it’s flaws and lingering beauty have helped inspire him…
“I grew up in and around pubs. Hearing people passing stories around a bar was like my going to library… [along with] hip-hop, Quentin Tarantino and Irvine Welsh Books.”
His route to a career in music wasn’t straight-forward. Scott says:

“After school I went on to Higher Education doing media studies but at the same time I found other “extra-curricular” activities and found myself high but with little education – I was failing so I quit rather than get pushed. I never really struggled finding a job but it was more of a case of the job keeping their employee – I’m extremely restless, and that’s not the same as lazy, which is important. The short story is I gambled on myself. I walked out of a job with nothing but a bunch of poems and thought well what’s the worst that can happen, and what’s the best…”

“Derelict Dreams is what I consider to be a 3 Act (track) Nostalgia Concept. There are several threads of a story that work through the songs but equally they’re great on their own. We’ve created a soundtrack to the story of the unnamed protagonist – part of which is obviously biographical. I could release an album tomorrow if I wanted to, but do I need to, do people listen to albums in that way anymore… We’ll see.”

Manchester has rich musical heritage with it’s homegrown artists and the many, many gigs taking place every night. With the band playing Night and Day Cafe on 22nd November 2019 it is one of Scott’s favourite Manchester venues, but not exclusively, as he tells:
“For it’s cult status… and I’ve seen more live acts there than anywhere else. For seeing people play it would have to be Manchester Academy. I saw Eminem make his first ever UK appearance…now that was a gig! Also I saw Prince at same venue!”

How does his Mancunian sense of humour translate away from the city?

“I love the [Manchester] sense of humour, the mixture of quick wit and self-deprecation. We take it for granted as it’s part of our fishbowl but when you go live elsewhere you sort of analyse it more because other people will point it out as they’re unsure or threatened. Sarcasm doesn’t travel well down South.”
Derelict Dreams EP is out now.