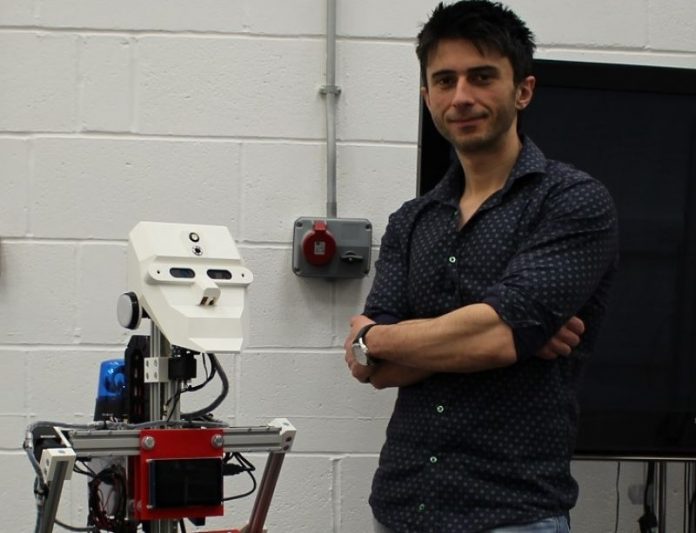 The BBC challenged robotics expert Theo Theodoridis to build a robot to live with Linda Bowles, who has multiple sclerosis. The result is on BBC2 over Christmas.

Ever met a robot who can tell you a joke? Well, a University of Salford lecturer has built a robot from scratch which can do just that … and a dozen things besides, writes Polly Riggs

Dr Theo Theodoridis built ‘Carrie’ over four months this summer – not just because he likes building robots (although he does) but for a new BBC show screening this Christmas.

His creation – ‘Carrie’ – is one of the stars of ‘Six Robots and Me’ and the only robot in the documentary built entirely from scratch.

Designed as a home-help for people who need it, Carrie can sense falls, carry trays and sound an alert if any medication is missed, or the gas is left on!

She can also ‘map’ a room, gaining a sense of spatial awareness and directional perception, meaning she can obey complex commands related to the room she is in.

The BBC filmed Carrie for a fortnight living with Linda Bowles, who has multiple sclerosis, and her husband Neil in their Suffolk home.

Because Carrie can speak, recognise voices and faces, and has the ability to learn, Dr Theodoridis says that the Bowles’ learned to really engage with her ‘personality’, and loved having her around the house.

Dr Theodoridis, who has worked on human-robot interaction for NASA, believes we are not too far away from seeing service bots become a common feature in the home.

“Once the robots becoming affordable, I can envisage them being available to buy within the next ten years or so,” says Theo.

The show also features ‘ChefBot’ – programmed by Deepak Ajayakamar, a recent graduate from the Salford MSc in Robotics and Automation.

ChefBot has the ability to independently carry out simple cooking tasks such as making tea, coffee and toast, and even make an omelette!

Memorial stone to be unveiled to PC’s Bone and Hughes