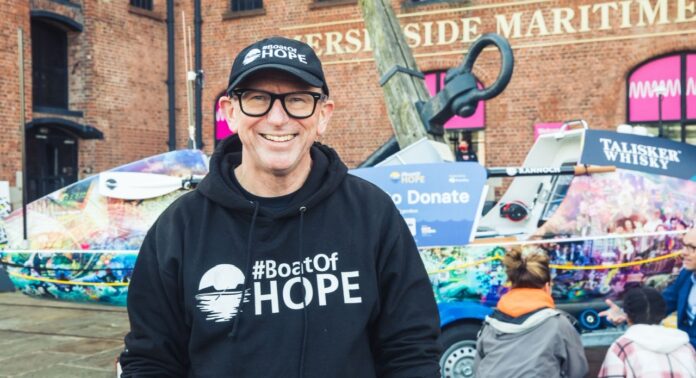 Five University of Salford students have been given the opportunity to work with Liverpool-born serial fundraiser and adventurer Bernie Hollywood OBE who will be undertaking a solo row across the Atlantic Ocean to support young people’s mental health.

The Journalism with PR students were tasked with developing and presenting a strategic social media campaign for Bernie Hollywood’s Boat Pull and National Schools Tour as part of the wider ‘Boat of Hope’ Campaign.

Bernie was so impressed he has now taken 5 Salford students on to support him in turning their ideas into reality.

Using Instagram and TikTok as the main platforms to release interactive content, the students aim is to increase the campaigns presence online whilst also raising money for the chosen charities, Samaritans, and Love Rowing.

Second year student’s Callie-Marie and Annie Dixon said: “We’re thrilled to be getting involved in this campaign for Bernie Hollywood. The ‘Boat of Hope’ is a fantastic concept for raising awareness and starting those conversations about mental health in children.

“It’s really exciting to see where we can take the campaign and to be able to get our foot in the door so soon is great. We’re bursting with ideas.”

“I am so grateful to have the talented students at the University of Salford supporting me on the Boat of Hope campaign. Their contributions to the social media campaign for the Boat Pull and National Schools Tour will be extremely valuable in helping to raise vital funds and awareness of the mental health issues many children and young people sadly face.

“The Atlantic row I am taking on in December will be the most physically and mentally gruelling challenge I have ever faced – but if I am able to help just one young person through the Boat of Hope campaign, it will all be worth it.”