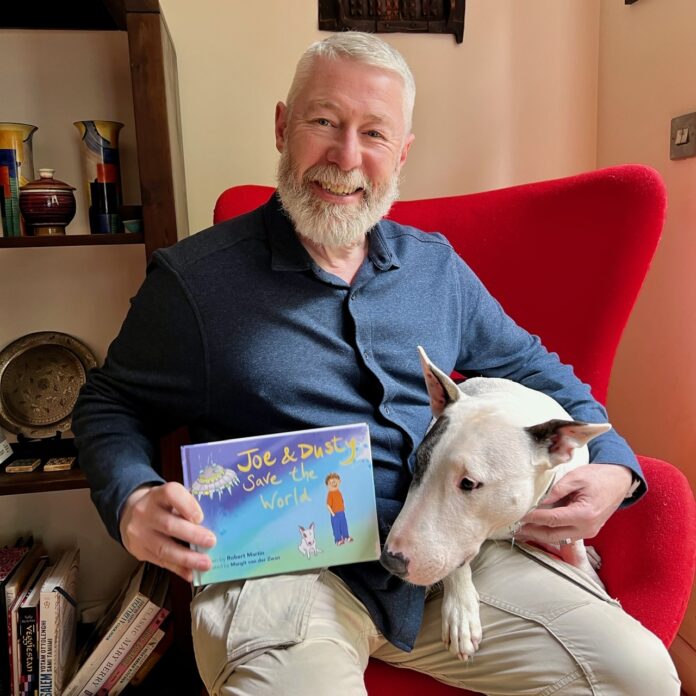 A Salford man has used his inheritance to put an unassuming disabled superhero centre stage.

When Rob Martin inherited money from his late mum, he decided to forgo the usual kitchen extensions and fancy holidays in favour of a more meaningful project. Instead, the 56-year-old opted to use the cash to publish a children’s book with an important message.

Joe and Dusty Save The World tells the tale of a young disabled boy called Joe and his trusty sidekick and support dog, Dusty, an English bull terrier.

In the picturebook, which is written entirely in rhyme, best friends Joe and Dusty are abducted by aliens who are set on blowing up planet earth. But thanks to Joe’s unwavering devotion to his dog and his infectious love of music and dancing, he manages to change the minds of his extra terrestrial captors by teaching them all about kindness, fun and love.

The book has already attracted the attention of some high profile fans, and features forewards by actor and activist Julie Hesmondhalgh and Sarah Gordy MBE, a TV and stage actor who has Down’s Syndrome.

Julie, best known for her role as Hayley Cropper in Coronation Street, who recently set up fundraising group 500 Acts of Kindness, said: “What a beautiful idea this is to put a child with learning differences and his dog companion at the centre of the action.”

Sarah said: “Heroes come in all shapes and sizes. We need different people to make the world better in lots of different ways.”

The book’s importance, says its creator, is that it focuses not on its disabled hero’s challenges, but on how Joe’s differences are in fact strengths.

Though Rob had already written an outline of the plot, it was hearing a poem written by his sister at their mother’s funeral in December 2019 that made him commit to fleshing out the storyline in catchy verse.

Next, Rob found an illustrator – Margit van der Zwan – to bring his dynamic duo to life and took steps towards getting the book professionally published.

For Rob, who grew up on the Wirral, writing a book that starred a disabled character, was a very personal affair. Aged just six, the freelance copywriter and marketing consultant lost his severely disabled teenage sister Pauline, who had lived with multiple conditions and spent much of her life in hospital.

The loss had a huge impact on the rest of the family, including Rob and middle sister Carol, and he says he is still affected by it today, 50 years later.

The author had a further shock when he himself realised he was living with his own disability. A late diagnosis of autism, a matter of weeks after his book was published, initially left Rob reeling. But after reflecting on his new discovery, Rob decided that knowledge was power.

“Suddenly everything started to make sense,” he said.

“Even I could spot that I shared many traits in common with Joe, and when I asked my sister and my husband if they had ever suspected I was autistic, they both said that they had.”

Rob says he now feels the significance of his disabled young champion to be even greater.

He said: “Joe and Dusty is a book about a young boy who just happens to be disabled. I deliberately don’t name Joe’s disability because it is not a book about what he finds difficult or can’t do. The story’s happy ending relies entirely upon Joe’s strengths.

“Whilst it’s a book about space and aliens, the underlying message is about celebrating people for their differences.

“It is also about the power of human connection, which is a very important message for everyone after the isolation we have all experienced over the last couple of years.”

Rob said that publishing Joe and Dusty felt like the best way to honour the memory of his mum and sister and to get a handle on his new understanding of himself as an autistic man.

“Joe and Dusty shines a light on the positive contributions disabled and neurodivergent people make to their families and to wider society,” he said.

“I could have spent my inheritance on an extension or a fancy holiday, but publishing a book can have a much bigger impact.”

Part of that impact has seen Rob and Dusty, Rob’s real-life dog, being asked to talk about the book and why being different is a strength at schools and events around Greater Manchester.

Rob already has a number of other ideas for further adventures for Joe and Dusty and hopes the book will be the first in a successful series.