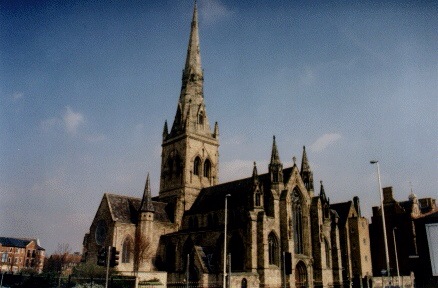 The evocative sounds of the Metrolink and the bell of Salford Cathedral will be combined with recordings from downtown Chicago and the shores of Lake Michigan for a live trans-Atlantic musical performance at MediaCityUK this Friday (21 February).

Five postgraduate music students from the University of Salford will join with senior undergraduates from Columbia College, Chicago, via the internet for the concert, which will fuse a wide range of street sounds from the two cities with ambient electronic music.

Since then the Salford students have been working with the sounds of Chicago, while Columbia undergraduates have been experimenting with the Salford recordings. The resulting musical piece, integrating the two cities’ soundscapes, will be performed live by both ensembles, separated by nearly 4,000 miles but linked in real time through the internet, for the first time at the University of Salford’s MediaCityUK campus on Friday.

Professor Davismoon, The University’s Director of Music & Performance, said: “Often we choose to avoid the sounds of the city that we live and work in by filling our ears with audio from phones or iPods, sometimes for good reason, sometimes from habit.

“The soundscapes created in this performance are instead a sonic celebration of the cities of Chicago and Salford, recognising that the sound signature of where we are located has a profound effect upon our sense of identity.

Loops to and from ‘The Loop’, part of the Salford Sonic Fusion Project, will take place at the Digital Performance Lab, University of Salford, MediaCityUK, Salford, M50 2HE, on Friday 21 February from 7.00-8.00pm. Admission on the night is free of charge.