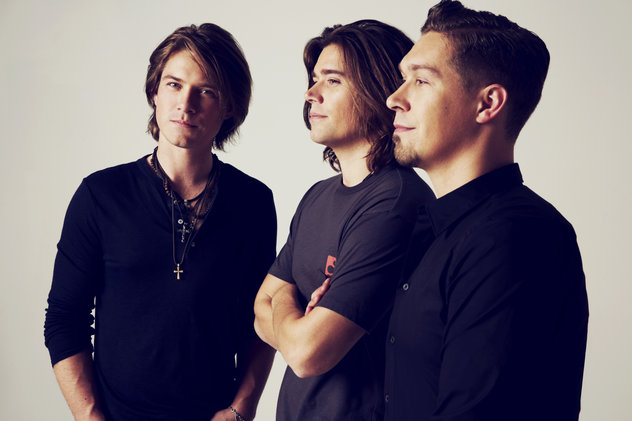 Following a sold out 25th Anniversary World Tour and Greatest Hits release, Grammy nominated multi-platinum pop-rock trio HANSON is beginning the next 25 years with a musical project unmatched in their history. HANSON’s String Theory Symphonic Tour will land in Australia in February-March 2019, with stops including the UK, Belgium, the Netherlands, and Australia, with a night at the iconic Sydney Opera House. See full tour dates below.

String Theory brings together an exciting collaboration of song craftsmanship and symphonic majesty, framing the established trio’s music through a special collaboration with Academy Award winning arranger David Campbell, spawning both a world tour featuring the band playing live with Symphony Orchestras, and a studio double-album, to be released on November 9.

HANSON’s most ambitious musical project to date, String Theory features songs spanning the band’s entire career from ‘MmmBop’ to ‘Where’s The Love’, ‘This Time Around’ and more, plus brand new or never-released-to-the-public songs like ‘Reaching For The Sky’ and ‘Siren Call’, which premiered last week.

“Siren Call” casts a fittingly dramatic mood with Zac Hanson providing lead vocals over a swell of strings and the thump of his drums. While the song has a distinctly orchestral feel, HANSON inject the song with a pop energy that comes out best in the brothers’ pristine harmonies.” – Rolling Stone

During the past quarter-century, Isaac, Taylor and Zac Hanson have made a significant mark in music, beginning with their meteoric rise off the back of 1997 global smash ‘MmmBop’. Their debut album Middle Of Nowhere spawned a string of Top 40 singles, followed by countless radio hits, five more studio albums, multiple Grammy nominations and record sales exceeding 16 million.

The group founded their own independent 3CG Records 15 years ago, positioning them among the most successful independent bands to date, and since then they have diversified their brand with the founding of the Hanson Brothers Beer Company and The Hop Jam Beer and Music Festival based in their hometown of Tulsa, Oklahoma.

String Theory is the next frontier for HANSON, telling a story of aspiration and fortitude against the odds. The music resonates with authenticity, coming from a group whose signature is never to chase trends, but instead to stay focused on their melodic artistry, establishing themselves as one of the few artists of their generation able to continually reinvent and reimagine their music, which has helped them to maintain an active global fan base over 25 years after their founding.

Following extensive North American dates, HANSON will deliver their unique String Theory tour to some of Europe & Australia’s finest venues in early-2019, a treat for fans around the world.

Tickets go onsale Friday at 10am via www.gigsandtours.com.

Love is in the air at Cloud 23