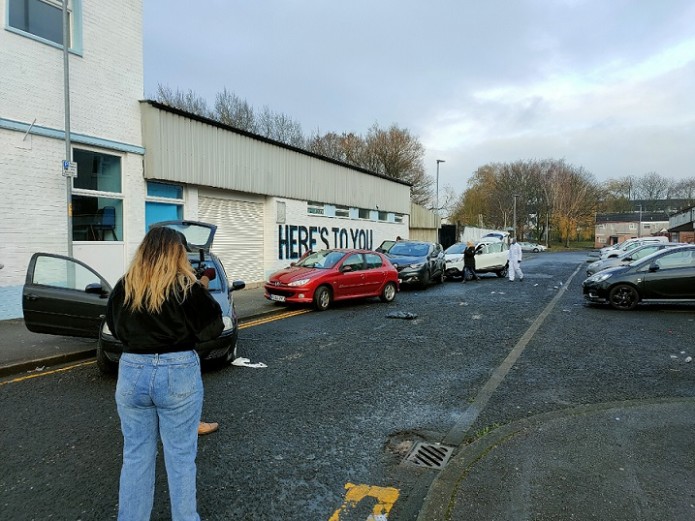 For most of us, living real time in a semi-apocalyptic world would be enough, but for Salford alumna Laura Petrie, the chance to star in an apocalypse-themed horror movie was too good to pass up!

Based on the streets on Manchester, Vamoose Productions’ “Day of the Clones” is about a scientist hiding in an abandoned farmhouse with a small group of survivors, after the drones he created have taken over the world.

Laura’s character who is also called Laura is one of those survivors, and while she can’t reveal too much about the movie, she did describe what kind of person her character is.

She said: “Laura is a character who is determined to get what she wants. While it’s not always the best decision to make, she’ll always go for it.”

The way Laura got the job is truly unique too, having made contact with the production company through her neighbour!

She said: “During the first lockdown I got in touch with them through my next-door neighbour. We were having some general chit-chat in our gardens, and he said that he knew someone I should speak to.

“I ended up doing a short film with them during the first lockdown and from that, they called and asked if I wanted to do Day of the Clones.’

Laura confessed that the horror genre was not what she had originally envisioned for herself, but now she loves it.

She said: “This is the first horror I’ve ever done, in my mind I had always imagined I’d do something more in the action genre, but I do love this role.”

After graduating from our BA (Hons) Media and Performance course in 2019, she went on to do some student projects before she found Vamoose Productions, and says that Salford laid the foundations for her fruitful career.

Vamoose Productions has paused filming on Day of the Clones due to the lockdown, but they have already shot over 60 percent of the movie. You can find out more, by clicking here.