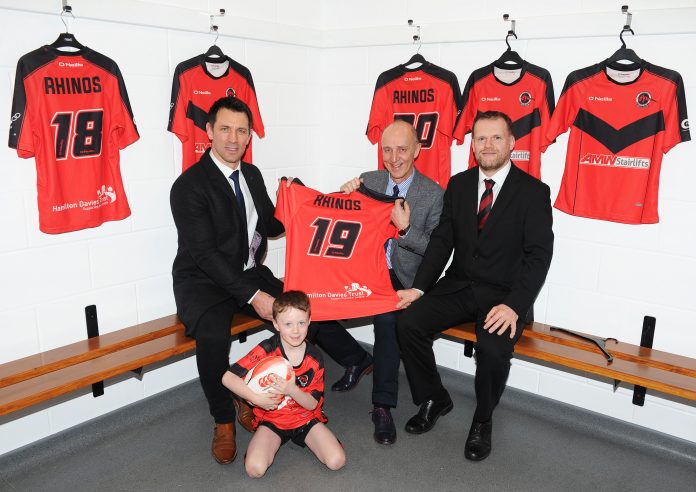 Rugby League legend Paul Sculthorpe MBE was joined by modern-day stars of the game to kick off a new era for Cadishead Rhinos RLFC when he opened the side’s new, state-of-the-art clubhouse yesterday.

Local people will get their first chance to see the facilities for themselves during an open day on Saturday April 7, which will include children’s and adult rugby games, followed by the Rhinos first home game since work began at the ground in 2012, against Clock Face Miners A.

Around £580,000 has been invested in transforming the Rhinos’ clubhouse, which promises to bring huge benefits to the local community as well as the club itself.

The successful and rapidly developing club’s old Lords Street HQ was in poor condition, did not meet league requirements and would have cost too much to repair and improve.

The new building meets league standards, providing a much better environment for the 12,000 people that use the facilities each year. It includes flexible changing rooms to allow for female-only teams for the first time, disabled facilities and a kitchen and social area.

The Rhinos have existing training, coaching and community participation links with local Super League club Salford Red Devils, who are keen to develop this further. Coupled with the new building, this is expected to encourage many more participants, particularly young people.

Paul Sculthorpe said: “The new Cadishead Rhinos clubhouse is impressive and I’m sure the players, fans and the whole local community will benefit from it. Top-class facilities like these are great for the sport and will help the club to continue to grow and develop by attracting more and more local people to get involved.”

Graham Chisnall, HDT Trustee, commented: “I’m thrilled that the Cadishead Rhinos have a state-of-the-art club fit for a team which is going places.

“This modern, new facility will also bring huge benefits to the local community, with many more individuals, schools and community groups able to get involved in the future.

“We and our partners have all worked hard to make this ambitious and exciting project happen and we are all delighted to see it come to fruition.”

Salford City Mayor Paul Dennett said: “The opening of this brand new clubhouse is fantastic news for Cadishead Rhinos and the local community and we’re proud to have played a part to make it happen.

“The council secured £100,000 towards the upgrade from Section 106 contributions. This money is paid by local developers to reduce the impact of their works on local people.

“We now look forward to seeing the club thrive for future generations.”

Paul Elliott, Rhinos Head Coach and Secretary said: “The new clubhouse is fantastic! It will be great for the local community and will make our club the envy of many rugby clubs in the North West. We can’t wait to start using it. Thanks to all of the partners who have contributed to making this happen.