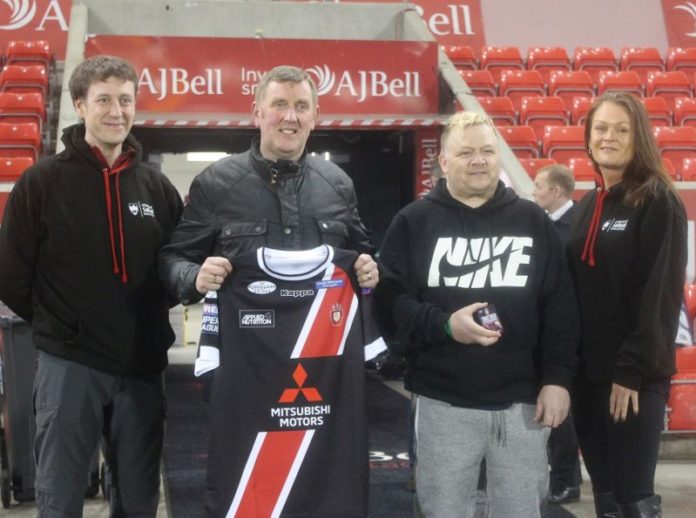 Salford Red Devils fans have more to celebrate than just reaching the end of season playoffs, thanks to a fitness app.

On the pitch it has been a remarkable season for the club, with a club record eight consecutive wins to secure a place in the end of season play-offs, which continue this week with a game against Castleford on Thursday night. And off the pitch the fans have really performed too, by using the Red Devils Fan Fit app, they have walked more than 200,000 miles over the season.
Designed by experts at the University of Salford, Fan Fit allows apps to be created for organisations such as sports clubs. The app contains club information, social media and records walking and running to allow fans to create a friendly competition and win prizes. Salford Red Devils Rugby League club were the first to sign up to be partners for the app and their fans have been competing with each other for the past few months, with amazing results.
Hundreds of fans have used the app since it was launched, doing a staggering 436,482,962 steps over the last year, the equivalent of more than 200,000 miles.
The North West as a whole recently came near the bottom of league tables for health and fitness, with rates of heart disease and stroke among the highest in the country. Sports clubs in the region believe they could be doing more to combat this, as a duty of care to their fans and Fan Fit could play a huge part of that.
Dr Alex Fenton, project lead and founder of Fan Fit, from the University of Salford Business School, said: “It’s been received really well by Salford Red Devils fans this year and it makes me really proud that a university project has made a difference to peoples lives in this way. We’ve been delighted with the number of fans who have signed up and really taken it on and got fitter as a result.
“We’ve just released an update to the Salford Red Devils Fan Fit app on both Android and iPhone. We’d encourage more fans to download or update it to get club info and updates but also to join in with the Fan Fit fun and experience the new features we’ve added.
“There’s a new feature where fans can create and share private leagues and create a friendly completion between them. We’re also running a competition where whoever has the most fans in their private league that have done 10,000 steps or more by October 31st will win a Garmin fitness wristband.”
As well as the fitness tracker, step leagues and digital badges, the app provides video, social media and news feeds, and fixtures and results, so fans can keep in touch with the latest club news while keeping fit at the same time.
Ian Blease, Director of Rugby and Operations, Salford Red Devils, said: “It is great that so many fans have signed up to this app and are doing such a huge amount of exercise. A lot of fans from all clubs and sports just come to matches, maybe after being in the pub, and watch athletes run around the pitch, without doing any exercise themselves.
“At Salford Red Devils we want to try to change that and this is great way of doing that. Congratulations to all our fans who have put so much effort in over the season.”

Rugby Football League headquarters to move to the Etihad Campus