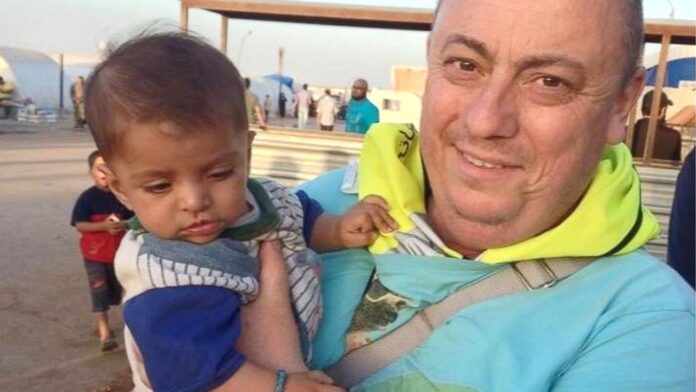 Salford will pay a further tribute to heroic taxi driver Alan Henning by naming a major road in his honour.

The Salford Western Gateway, the one-mile dual carriageway which connects the A57 Liverpool Road in Salford and Trafford Way to the east of the M60 in Trafford will be named Alan Henning Way.

Salford City Council is working with the developer Peel Holdings to complete the final process of adoption and the road will be formally named in the near future.

City Mayor Paul Dennett said once the road is in public ownership it will be “an honour” to name it in tribute to Alan.

“Port Salford is the first inland UK port and distribution hub which is served by short sea shipping, using the Manchester Ship Canal, rail and roads linking it to the motorway network,” he said.

“The new road was chosen for several reasons. It is a vital, international distribution link and an essential part of the Port Salford scheme. As the port continues to grow, Alan Henning Way will become an even more important gateway to Salford.

“There is so much of Alan in that – a man who was a vital part of humanitarian aid missions and a man willing to give up his home comforts to travel internationally to distribute goods to families and children in desperate need.

“It will be an honour to see his name on the signs so that his bravery and kindness are never forgotten.”

Barbara Keeley, MP for Worsley and Eccles, paid tribute to Alan and said she was delighted with the decision.

“Alan was a local hero and local people wanted a tribute to him, knowing that he had given his life taking aid to children and families in need in Syria. It is right that the city of Salford is naming a road after Alan and people in Salford and across the UK will be pleased with this tribute to his compassion and generous spirit,” she said.

In 2016, after discussions with Alan’s family, Salford City Council created a memorial park to Alan at Eccles Recreation Ground, where people gathered to light candles and hold a silent vigil after news of his murder was revealed.

The design is based on a clock face and features a circular flower bed with yellow flowers and plants, wooden sleepers painted yellow and two granite boulders bearing memorial plaques to recall to the yellow ribbons that were used to show solidarity with Alan’s family during his captivity and after he was murdered. A family headstone at Eccles Parish Church also bears his name.

Eccles ward councillor, Councillor Shamina August, added: “Alan touched the lives of so many people. Thousands of people across the city spoke out and said they wanted a way to make sure Alan was never forgotten as a true son of Salford. This road will make sure we remember that the world would be a better place, if we all showed the same Spirit of Salford as Alan did.”