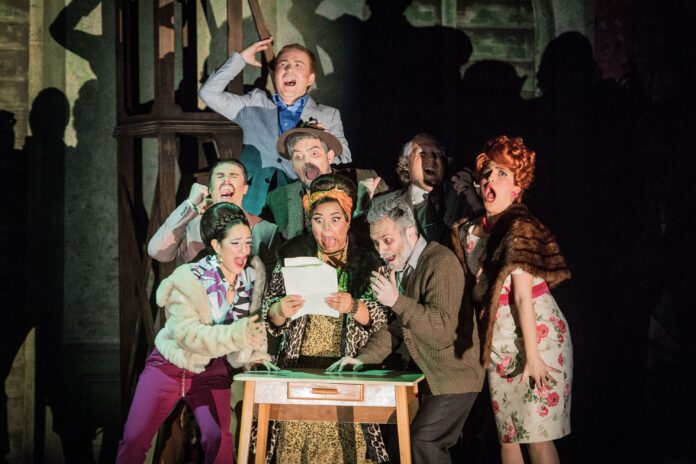 RNCM Opera is returning to the stage this December after an absence of two years to present a double bill programme, Ariadne + The Medium. Tickets are now on sale for the fully staged production, which takes place on Sunday 12 December (3.00pm), Monday 13 December (7.30pm), Wednesday 15 December (7.30pm) and Thursday 16 December (7.30pm).

The comedy versus tragedy of Richard Strauss’ Ariadne auf Naxos (prologue) is the perfect contrast to the operatic melodrama conjured up in Gian Carlo Menotti’s The Medium. In one we see the struggle unfold as two theatrical groups clash when circumstances conspire and they are forced to perform their shows simultaneously, and in the other it’s a fraudulent psychic who takes centre stage and finds her own bluff called when she encounters a genuine ghostly presence.

Professor Lynne Dawson, Head of the School of Vocal Studies and Opera, says, “It’s wonderful that RNCM Opera is returning to the stage this season, performing to audiences for the first time since 2019. Fully-staged, from lighting to costumes, this is an enthralling and special double bill that encapsulates the thrill and exhilaration of live opera and the brilliance of RNCM vocal and orchestral students.”

Postgraduate singer Emyr Jones, who’s performing the role of Ein Musiklehrer in Strauss’ Ariadne auf Naxos (Prologue), says, “I love being part of this production because it’s the first fully-staged opera with orchestra the College has put on in two years. It’s also a brilliant opportunity to work with other aspiring students and to get to know them well. There’s a great sense of camaraderie because we’re all working to achieve our full potential, and it’s amazing that we get to work with a professional conductor, director and creative team.”

Conducting Ariadne + The Medium will be one of the UK’s most experienced and versatile conductors, Peter Robinson, with the performance directed by British Youth Opera’s Director of Training and Programmes, Stuart Barker. Ariadne + The Medium will take place in RNCM Theatre, a state of the art performance space that seats over 600 people. The programme is two hours and 10 minutes (including 30 minute interval) and both operas will have English surtitles.

The Royal Northern College of Music (RNCM) is recognised as one of the world’s leading training centres for opera, from where students have gone on to perform at Glyndebourne, The Royal Opera House, Opera North, Gothenburg Opera, Scottish National Opera and Metropolitan Opera, New York.

Tickets to Ariadne + The Medium are priced at £20 and bookable here.

From Big Brother to bankruptcy to a Hale solo show