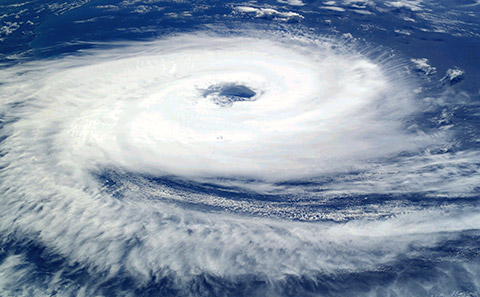 Human-caused climate change will make strong tropical cyclones twice as frequent by the middle of the century, putting large parts of the world at risk, according to a new study published in Scientific Advances. The analysis also projects that maximum wind speeds associated with these cyclones could increase by around 20%.

Despite being amongst the world’s most destructive extreme weather events, tropical cyclones are relatively rare. In a given year, only around 80-100 tropical cyclones form globally, most of which never make landfall. In addition, accurate global historical records are scarce, making it hard to predict where they will occur and what actions Governments should take to prepare.

To overcome this limitation, an international group of scientists involving Ivan Haigh from the University of Southampton developed a new approach that combined historical data with global climate models to generate hundreds of thousands of “synthetic tropical cyclones”.

“Our results can help identify the locations prone to the largest increase in tropical cyclone risk. Local governments can then take measures to reduce risk in their region, so that damage and fatalities can be reduced.”

“With our publicly available data, we can now analyse tropical cyclone risk more accurately for every individual coastal city or region.”

By creating a very large dataset with these computer-generated cyclones, which have similar features to natural cyclones, the researchers were able to much more accurately project the occurrence and behaviour of tropical cyclones around the world over the next decades in the face of climate change, even in regions where tropical cyclones hardly ever occur today.

The team’s analysis found that the frequency of the most intense cyclones, those from Category 3 or higher, will double globally due to climate change, while weaker tropical cyclones and tropical storms will become less common in most of the world’s regions. The exception to this will be the Bay of Bengal, where the researchers found a decrease in the frequency of intense cyclones.

Many of the most at risk locations will be in low-income countries. Countries where tropical cyclones are relatively rare today will see an increased risk in the coming years, including Cambodia, Laos, Mozambique and many Pacific Island Nations, such as the Solomon Islands and Tonga. Globally, Asia will see the largest increase in the number of people exposed to tropical cyclones, with additional millions exposed in China, Japan, South Korea and Vietnam.

“Of particular concern is that the results of our study highlight that some regions that don’t currently experience tropical cyclones are likely to in the near future with climate change.”

The study could help governments and organisations better assess the risk from these type of cyclones, thereby supporting the development of risk mitigation strategies to minimise impacts and loss of life.