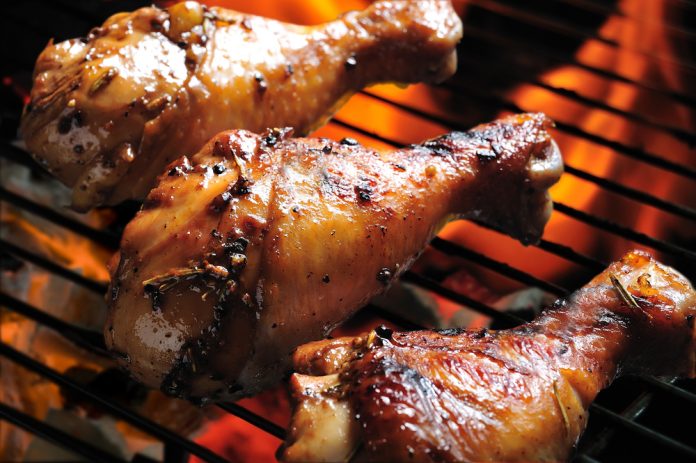 A new study, conducted by a team of UK based researchers involving The University of Manchester, Bangor University and the University of Liverpool, known as the ENIGMA Project, has revealed the levels of bad behaviours in UK kitchens which increase the public’s risk of getting food poisoning.

The survey of over 200 chefs has revealed that:

The ENIGMA Project is a large collaborative programme of research into the most common bacterial cause of diarrhoeal disease in the developed world, Campylobacter.

Undercooked barbeque chicken is associated with Campylobacter, and in addition, chefs returning to work too soon after suffering from diarrhoea and/or vomiting have been implicated in high-profile food poisoning outbreaks such as the one at Heston Blumenthal’s Fat Duck restaurant.

The research, published in journal PLOS ONE, found that avoiding eating where such behaviours take place is not easy for the public, because chefs working in award-winning kitchens were more likely to have returned to work within 48 hours of suffering from diarrhoea and vomiting, and not washing hands was more likely in upmarket establishments – despite over a third of the public agreeing that the more expensive a meal was, the safer they would expect it to be.

Chefs working in restaurants with a good Food Hygiene Rating Scheme score were just as likely to have committed the risky behaviours at some time in their career, or to have worked with others who had.

Among the public sample, the team found:

The behaviours involved were embarrassing or potentially incriminating to reveal, so the researchers used something called the Randomised Response Technique (RRT) to cope with the fact that people might not want to reveal the truth about their dark kitchen secrets. This involved those surveyed rolling two dice in secret, and switching their answers (Yes to No; No to Yes) according to the values they rolled. The technique makes people more prepared to reveal the truth than just asking them directly, and the researchers were able to recover the true rates of the bad behaviours from the data.

“Foodborne illnesses impose a huge burden to the UK population, and these results indicate a high prevalence of behaviours which can give people food poisoning,” said Professor Dan Rigby from The University of Manchester, one of the lead authors of the study. “Masking the smell and taste of meat on the turn is an old industry trick, and the ability to do it means restaurants can cut costs. Showing you can do it shows a potential employer you are experienced in the industry.”

“It is notable that chefs in fine dining establishments were more likely to have returned to work too soon after suffering diarrhoea and/or vomiting, contravening UK regulations – this may be that fear of losing a prestigious job, or a desire not to let the team down, is causing people to not to stay away for long enough, putting the public at risk.”

“Staff currently working in kitchens with higher prices, more awards or a good Food Hygiene Rating Scheme were no less likely to have committed the bad behaviours , or have worked with colleagues who had in the past – meaning that the public face a difficult challenge to protect themselves from these bad kitchen behaviours.”

Commenting on the dice rolling technique, Dr Paul Cross from Bangor University said: “Whilst this may appear to be an unexpected use of dice, it has been repeatedly demonstrated that it is the most effective method for obtaining honest answers to very sensitive questions. We’re therefore confident in the reliability of the data we’ve collected and the implications this holds for food safety practices”.

The University of Liverpool’s Professor Sarah O’Brien, said: “We know that food handling behaviours can create or worsen food safety hazards. By bringing together researchers from different scientific disciplines in the ENIGMA project, we now have a much better idea of what really goes on.”

The best job ever for Lego Lovers