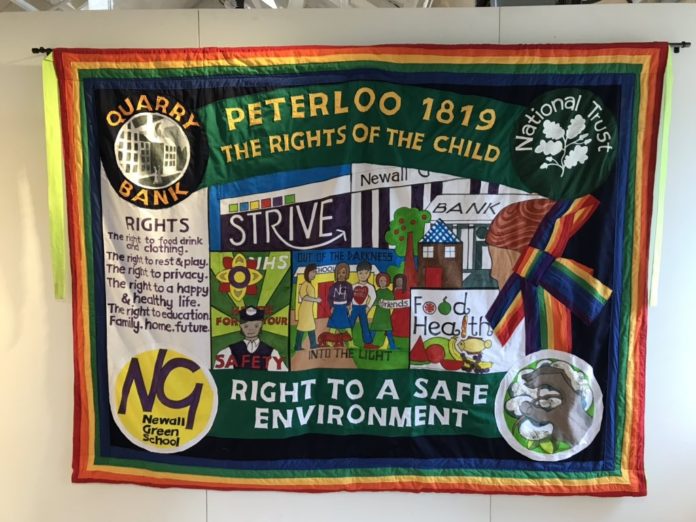 Visitors will have chance to discover how children’s rights have changed over time in a brand new exhibition at QuarryBank, Rights of the Child.

Launching on 6 April and running until 29 September, the exhibition at the National Trust attraction will explore the experiences of hundreds of children who worked at Quarry Bank, tracing the evolution of children’s rights from the 19th century to today.

Visitors can see archive material from QuarryBank and Dunham Massey, including letters, newspaper articles and indentures, which capture the stories of working class people and the evolving right for fair and appropriate treatment of children.

Their calls for representation, rights and equality which were once silenced can now be heard. Visitors can uncover their stories as they feel the thundering of the mill machinery beneath their feet, giving some sense of the working conditions experienced by the children at Quarry Bank. An imposing 5 meter long banner depicting the significance of the 1833 Factory Act will also be hung in the exhibition. Designed in 2015, this is the first time this powerful banner will have been displayed outside of its original home in Westminster Hall.

As well as looking back to the historic experiences of hundreds of children who grew up in a world  without rights to protect their health and wellbeing, the exhibition also looks forward and asks ‘what rights would you stand up for today? How much work is there still left to be done?’ Featuring new protest banners created by trade union banner maker Ed Hall, with help from Styal Primary School and Newall Green High School pupils, the exhibition explores what rights are important to young people today.

Alongside other campaign materials created by the students, including posters and sashes, these brand new protest banners consider the significance of the right to health care, the right to a safe environment and the right of association – allowing people the opportunity to join clubs and support causes important to them. A short film on young carer’s rights has also been produced, which aims to inspire visitors to think about the rights people have today and what they what they would stand up and campaign for.

Suzanne Kellett, Programming Manager at Quarry Bank says, ‘This year we’re exploring the stories of the child workers from QuarryBank against a backdrop of political unrest in the 19th century and the fight for children’s rights. It’s a poignant time to be talking about these important themes with 2019 marking the 30th anniversary of the UN Rights of the Child Act and the 200th anniversary of the Peterloo Massacre. Both of these moments in history have dramatically impacted the rights we hold today and we hope visitors toRights of the Child will be encouraged to reflect on our rights and significant issues, sparking discussion and debate.’

2019 is a topical year for the rights of children marking the 30th anniversary of the UN Convention on Rights of the Child, which outlines the political, economic, social and cultural rights that all children today are entitled to. These include rights to leisure, play and culture, access to health services and protection against child labour.

2019 is also a key year in Manchester’s history of social change marking 200 years since the Peterloo Massacre, a key moment in British history when working people marched to demand a voice and were cut down, leading to a resurgence in demands for representation, equality and opportunity.

Visitors can uncover Quarry Bank’s connection to these events and discover how mill owners Samuel Greg and Robert Hyde Greg witnessed the massacre and spoke out against the atrocities.

Nevertheless, the Greg family were part of a manufacturing class who would often put profit before people, silencing calls for improved working conditions and blocking appeals to reduce working hours to 10 hours per day.

When the mill at Quarry Bank first opened in 1784, children made up over 50% of the workforce at Quarry Bank, forming a vital part of the mill’s operation. Children as young as 8 years old were employed for cheap labour, brought from the workhouses or their family homes to the Apprentice House at QuarryBank. As many as 90 children lived together at any one time, working long and gruelling hours in the mill under dangerous conditions, in exchange for food, clothes and board.

Their work shaped the industrial revolution in Manchester and helped Quarry Bank to become one of the largest cotton manufacturing businesses in the world. As part of one of the first ever industrial communities, these children were on the frontline of a new and emerging relationship between workers and the powerful elite, between rights and responsibilities. Their story is that of the early Industrial Revolution, when society stood at a turning point.

Through the Rights of the Child exhibition, visitors can discover how children’s rights have changed over time at Quarry Bank with the introduction of Factory Acts, Working Hours Bills and Education Acts. The exhibition will uncover the stories of QuarryBank’s child workers asking ‘what are the rights and freedoms we can expect today, and how did we secure them?’

The exhibition is part of the National Trust’s year-long programme People’s Landscapes, a series of events and activities that will explore landscapes where people came together to seek dramatic social change.

Rights of the Child opens at Quarry Bank on 6 April and runs to 29 September. For further information visit www.nationaltrust.org.uk/quarry-bank