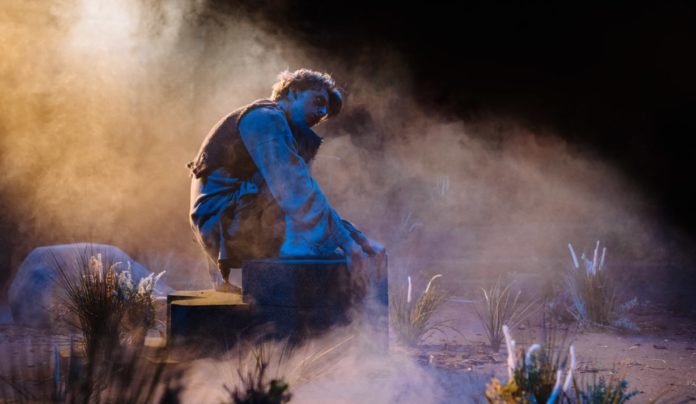 I’ve got to be honest with you, I’ve never read Wuthering Heights and my knowledge of the story came directly from Kate Bush’s 1977 hit. But, do you know what, that’s all you need as the story is easy to follow as it unfolds. It is funny in parts and is crammed full of love but certainly not in the traditional romantic boy meets girl way so be prepared to experience many emotions as it is no Elizabeth and Mr Darcy situation.

The Royal Exchange Theatre layout is used to the full and the setting very soon has you transported to the wilderness of the Yorkshire Moors. From the beginning of the play when the actors are playing children to the end of the play, where all the actors have been seamlessly transformed into the serious, tortured and well-healed adults right before your eyes, the acting is brilliantly believable. The chemistry worked well between Heathcliffe (Alex Austin), Cathy (Rakhee Sharma) and Hindley (Gurjeet Singh) and I felt so desperately sad for Isabella (Rhiannon Clements) ending up completely trapped for loving such a cruel man. The setting has a touch of Shakespeare about it and the music really helped to create the atmosphere, build the mood and tell the story.

For the fainthearted, you need to be prepared for some full-on male nudity early in the play as Heathcliffe takes a bath and the graphic theme of birds and blood, especially how a cuckoo infiltrate and ultimately takes over a nest, did make me wince a little in parts.

It was great to hear so many northern accents in one place. Heathcliffe was the only one who had a southern accent and I am not sure if this was deliberate to set him aside even more than he already was. It was rather long but I was completely reeled in. Similarly to the way the actors transform, the story itself is witty and funny in the first half, especially Linton (Dean Fagen), and soon twists into a deliciously dark piece. I am not usually too much of an emotional person so I did find myself chuckling at first then there were several parts where I had a great big lump in my throat, especially as the characters ascended into heaven, particularly Earnshaw (David Crellin), the father, as this was beautifully done.

I did feel a little dizzy with all the running around the stage but that just added to the intensity when Heathcliffe finally found Cathy. I found I was holding my breath in the scenes where Cathy goes mad, especially as a little while ago, this talented actress was making us believe she was a young carefree girl running about the moors. She was soon put out of her misery, though, and I must say, she was the happiest and most contented dead person I think I have ever seen.

We know there is a very fine line between love and hate but the bitterness becomes more visible the further we are taken into the play. I felt very sorry for poor Linton watching his wife love another man so fiercely. Even at the very end, I wanted to give it a standing ovation but couldn’t quite bring myself as I thought I might cry.

I can highly recommend this is a new adaptation before it closes on the 7th March.