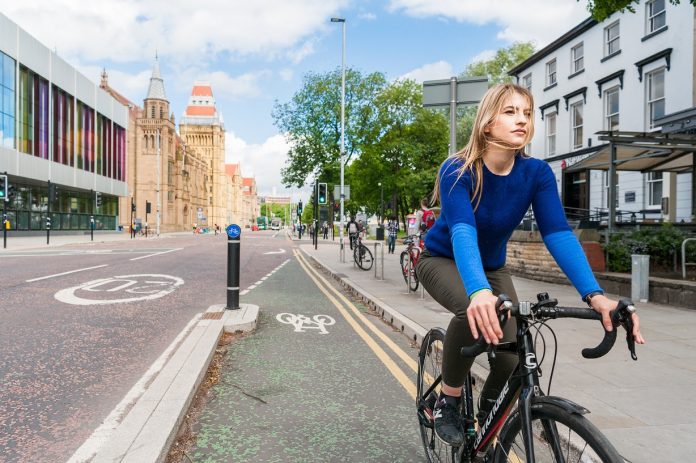 Bike Life, the UK’s biggest assessment of cycling in cities, reveals four out of five people in Greater Manchester (77%) want more protected bike routes to make cycling safer, even when this could mean less space for other road traffic.

The report, which is commissioned every two years by Sustrans and Transport for Greater Manchester, reveals that out of the 1,100 people surveyed throughout the city region, more than two-thirds (69%) say more cycling would make their city a better place to live and work.

Most residents interviewed think that more space for cycling and walking or buses, as opposed to more space for cars, is the best way to keep their city moving, improve people’s health and air quality.

Even people who said they never ride a bike still overwhelmingly support the provision of segregated routes (74%), despite the fact it could mean less space for other road traffic. There were 35 million trips made by bicycle in Greater Manchester in 2016.

27% of residents interviewed across the city region think cycling safety in Greater Manchester is good and 65% would cycle more if on-road cycle routes were physically separated from traffic. The results also show that 31% of residents don’t currently ride a bike, but would like to. Three-quarters (76%) support more investment in cycling.

Greater Manchester was one of seven Bike Life reports for UK cities, which overwhelmingly indicate the demand for protected bike lanes to make cycling safer. Out of 7,700 people surveyed in Belfast, Birmingham, Bristol, Cardiff, Edinburgh, Greater Manchester and Newcastle, 78% of respondents said they wanted more segregated routes for cycling, even when this means less space for road traffic.

Greater Manchester results show several improvements in people’s attitudes to cycling since the last report two years ago. In 2015, for example, 38% of residents said the city was a good place to cycle and 37% thought the condition of cycle routes was good, while in 2017 this had increased to 43% in both questions.  In 2016 a largely segregated cycleway was opened on Oxford Road and Wilmslow Road, which is now attracting up to 5,000 cycling journeys every day.

Rosslyn Colderley, Sustrans Director for England (North), said. “The Bike Life report is the voice of people throughout Greater Manchester. It clearly shows that most people living in the city region think cycling is a good thing and are far more supportive of bold and ambitious plans for cycling than decision-makers often think.

“The new Wilmslow Road Cycleway has been incredibly popular and we know people want more dedicated space like this for cycling, even when this means taking space away from cars.”

“This is an exciting time for the city region as we look at new approaches to transport, health and environment. Mayor Andy Burnham has made a clear commitment to funding cycling at the kind of levels we see in London and Scotland.

“Creating streets designed for people, not motor vehicles, to help more people walk or cycle is the key to keeping Greater Manchester moving and improving our health and economic vitality.”

Chris Boardman, British Cycling Policy adviser and now Greater Manchester’s first Cycling and Walking Commissioner, said: “Evidence has shown us time and again that the world’s happiest and healthiest cities all have high cycling rates in common. It’s no coincidence, cycling really is the silver bullet.

“More people using bikes instead of cars would address so many of the problems our urban centres face – health, congestion, air quality, social inclusion…you name it, more cycling will have a positive impact on it.

“Greater Manchester is determined to become one of the most attractive city regions in the world and, in pursing that aim, it’s great to see through Bike Life the vast majority of our residents want us to prioritise making cycling a safe and attractive thing for them to do.”

The Bike Life reports are inspired by the Copenhagen Bicycle Account, and are the UK’s second biennial reports to measure development in cycling, identify challenges and inform planning. Copenhagen began the Bicycle Accounts in 1996 and is now one of the world’s most cycle-friendly cities. In 2016 41% of trips to work and study in Copenhagen were made by bike and 76% of people felt secure while cycling.

Police officer’s house is vandalised with a Swastika

Life for drivers who cause death by dangerous driving