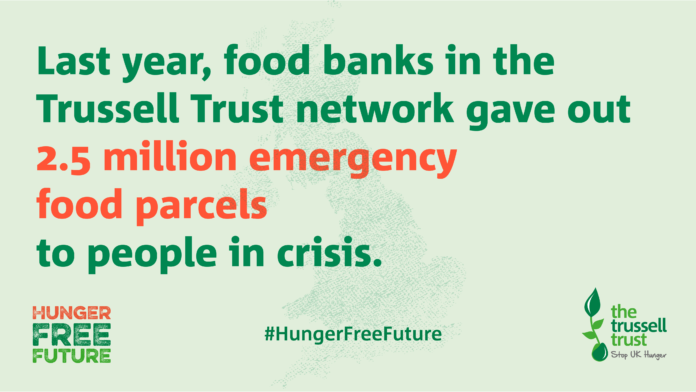 Record 2.5 million emergency food parcels given to people across UK with just under 1m going to children – that’s two parcels every minute.

The Trussell Trust Is Urgently Calling On All Levels Of Government Across The UK To Commit To Developing A Plan To End The Need For Food Banks Once And For All.

Today, the Trussell Trust reports that food banks in its UK network gave more than 2.5 million emergency food parcels to people facing crisis between April 2020 and March 2021. More than 980,000 of these went to children– that’s almost two parcels on average every minute. Food banks in its network experienced a 33% increase in need during the past extraordinarily difficult year – with a 36% rise in parcels given for children compared with 2019/20.

The charity warns that with need for emergency food increasing year-on-year, today’s figures highlight an alarming 128% rise compared to this time five years ago. It is also the first time the number of food parcels distributed has topped two million.

Worryingly, these figures are just the tip of the iceberg with unprecedented numbers of people being helped by other food aid providers and community-based groups that sprang up to provide emergency food during the pandemic.

Hunger in the UK isn’t about food, the charity says, it’s about people not having enough money for the basics and with high rates of unemployment and record redundancies, more people than ever need the social security system to provide a strong enough lifeline to stay afloat.

The Trussell Trust is now urgently calling on all levels of government to act. It’s urging candidates standing in the upcoming May elections across England, Scotland, and Wales to commit to working to end the need for food banks and developing a plan to do so, if elected.

“No one should face the indignity of needing emergency food. Yet our network of food banks has given out record numbers of food parcels as more and more people struggle without enough money for the essentials. This is not right but we know we can build a better future. This pandemic has shown the unexpected can hit suddenly, but we know when we push for change, united by our desire for justice and compassion, the government has to listen and act.

“We are asking you, the public, to write to your local candidates standing for election on 6 May, asking them to commit to working to end the need for food banks if elected. Together we can take action now to build a hunger free future.”

“It’s the Government’s responsibility to stop hunger from happening in the first place so that everyone is able to afford to buy food and other essentials.”

Woman in her 30’s sexually assaulted in Collyhurst