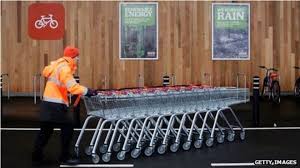 The latest figures on employment and the labour market have just been released by the Office for National Statistics.

On an hourly earnings basis, the proportion of low-paid employee jobs fell to 16.2% in 2019, the lowest since the series began in 1997.

The largest decrease in the proportion of low-paid employee jobs compared with 2000 has been in Scotland.

However, the highest earning full-time employee jobs were paid almost five times as much per hour (excluding overtime) as the lowest paid, although this has narrowed in the past five years.

The number of jobs paid below the National Minimum Wage and National Living Wage decreased over the year to 425,000 employee jobs.

“The foundations of even the strongest economy are bound to be shaken by prolonged periods of political uncertainty and this has certainly been the case across the UK due to the shower of incompetents attempting to resolve our exit from the European Union.

However, employment and in particular a decent level of earnings are also fundamental to economic prosperity and not least to tax revenues and consumer spending. So, while we continue to fret over Brexit deadlines and deals, these latest numbers showing significant buoyancy of earnings amongst the lower paid in society are surely a silver lining to an otherwise cloudy outlook.”