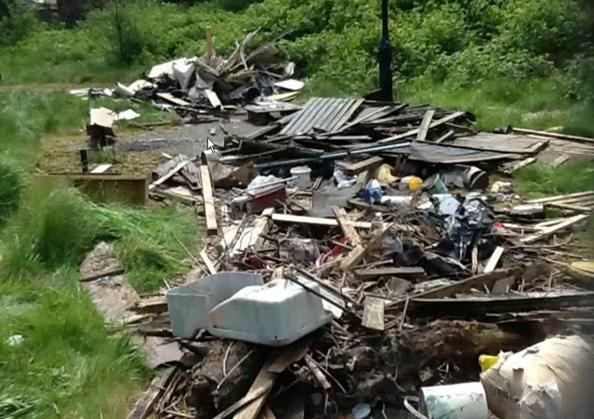 A man from Beswick who ran his own fly-tipping operation on an industrial scale has been sentenced at Manchester Magistrates Court.

Patrick Keenan was handed a 20 week prison sentence suspended for 12 months, plus 200 hours of community service and a total penalty of £2,399.

Keenan collected domestic and industrial waste from addresses across Manchester for a fee, before illegally dumping it – but his one-man fly-tipping spree is over, following a successful investigation by Manchester City Council’s Environmental Crimes team.

Keenan, 23, of Bosworth Street, Manchester, denied any involvement in fly-tipping at an interview under caution and went on to commit more offences – until he was presented with CCTV evidence at a second interview and forced to admit his guilt.

In April 2017, the council received an anonymous tip-off, informing them that a blue LDV van had been seen dumping household waste and industrial rubble in the Bradford area of Manchester.

The letter included sufficient information to allow the council to investigate and the van identified in the letter was subsequently spotted by officers, containing furniture, black waste bags and cardboard boxes.  In May 2017, the same waste which was seen in the van was found fly-tipped, at a location near Holt Town.

Two further reports of fly-tipping at Ashton Canal Park were received from a security guard in the same month, with the same blue van found to be involved in the crimes.  On investigation, a letter addressed to Patrick Keenan, of Bosworth Street, Manchester, was found within the dumped waste and it was established that Keenan was the van’s registered keeper.

However, at an interview under caution in June 2017, Keenan claimed that he had sold the van earlier in 2017, before the offences were committed.

On reviewing previous fly-tipping cases, the Environmental Crimes team was able to identify Keenan from CCTV footage supplied by a city centre business owner, after rubbish relating to the owner’s business and residential addresses was found within fly-tipped waste on Sand Street, Cheetham in January 2017.  The footage showed Keenan collecting waste from the business owner’s residential address – the same rubbish which was later dumped on Sand Street.  The business owner confirmed to council investigators that she had paid Keenan £120 to take this rubbish.

Further CCTV footage, provided by one of Manchester City Council’s mobile enforcement cameras, caught Keenan in the act of committing a fly-tipping offence on Sand Street in July 2017.

After being presented with the evidence at a second interview under caution, Keenan admitted his involvement in all five of the identified fly-tipping offences – and confessed that his previous claims to have sold the van involved were false.

Murder investigation launched after man dies of stab wounds in hospital after attack in...