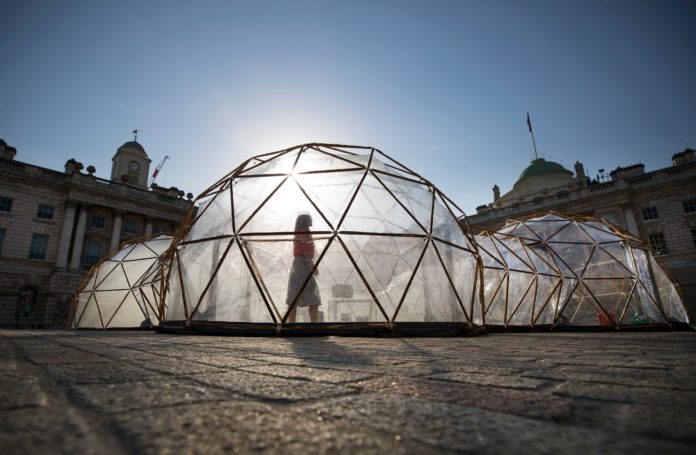 An internationally acclaimed artwork – allowing people to safely experience air pollution and smog from different cities around the world – is set to appear in Greater Manchester to mark the region’s first ever Clean Air Week.

Following stints in London and Vancouver, Michael Pinsky’s immersive Pollution Pods will be appearing in MediaCityUK from Monday 17 until Sunday 23 June.

The installation, brought to you by the Cape Farewell Foundation, will be open for free to the public throughout Clean Air Week, and uses harmless, specially created conditions to simulate the air quality in cities around the world.

“It’s also vital that we raise awareness of the health impacts of poor air quality. These Pollution Pods provide a really innovative and interesting way of allowing people to safely experience poor air quality for themselves and I would urge anyone who can make it to come along and find out more.

“I’d also encourage people to let us know their thoughts about Greater Manchester’s proposals for tackling poor air quality. A survey is open now online and closes on Sunday 30 June.”

Anyone who does visit the Pollution Pods will pass through a series of climatically controlled domes comparing five contrasting global environments, starting with the truly clean air of Tautra in Norway, through to smog and pollution found in London, New Dehli, Beijing and Sao Paolo, which between them suffer from some of the lowest air quality in the world.

On Thursday 20 June a team of air quality scientists from Kings College in London will be on site working with Manchester schools to better inform our youngsters what causes pollution and how we all need to be part of the solution – walking to school, bicycling, using clean public transport.

Clean Air Week itself aims to increase awareness of dirty air, which contributes to the equivalent of 1,200 deaths in Greater Manchester each year, as well as the simple changes we can all take to make our region’s air cleaner. This year the focus is on encouraging people to try walking and cycling for more of their short journeys.

Artist Michael Pinsky said: “Art should get people thinking and the Pollution Pods do just that. By taking people through a range of different cities and regions and exposing them to the simulated poor air quality their residents have to live with every day, we hope to raise awareness of this serious issue.

“What we do in the Pollution Pods is completely safe and harmless, but the same cannot be said for the areas we are recreating. Air pollution can seriously affect people’s health and wellbeing so we really need to be thinking about what can be done to tackle this issue.

“There is so much we can do to improve air quality in our cities and I hope the installation inspires people young and old to think about the difference they could make.”

The pods, which are completely free to enter, will be appearing in the Piazza at MediaCityUK and will be open to the public between 10am and 7pm every day from Monday 17 June to Sunday 23 June. They will also be hosting a number of schools from across Greater Manchester on Thursday 20 June – which is national Clean Air Day.

The latest cars on the road in the UK produce more carbon dioxide than...