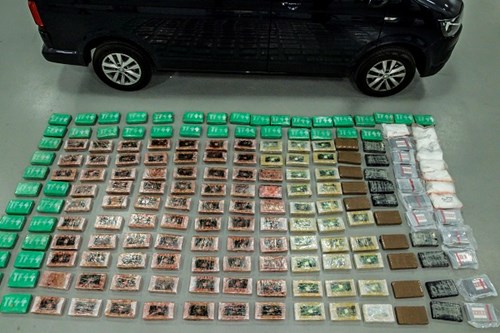 An organised crime group who conspired to supply the largest in land cocaine seizure to be sold across the North of England  have been jailed.

Jamie Simpson and three of his gang – Clare Smith, Andrew Daniels and Dean Brettle – were sentenced to a total of almost 35 years after they loaded £20 million worth of cocaine into a van in Rochester, Kent, to be transported to Warrington.

It was on the evening of 2 August 2018 when Simpson, Smith, Daniels and Brettle travelled back from Kent in a car and a van which contained 186kg of cocaine.

As they approached Warrington and reached the M6 northbound between junction 19 and 20 the gang were intercepted and stopped by police.

Both vehicles were searched and officers discovered multi-million pounds worth of cocaine hidden inside. The van had been specially adapted to conceal the drugs by being packed and placed into large metal draws then hidden beneath a false floor.

The colossal seizure, under the control of leader Simpson, came while the Serious and Organised Crime Unit were leading a 14-month covert investigation into another Warrington based organised crime group.

The gang was headed by Jamie Oldroyd, owner of ProLease – a vehicle leasing company in Warrington – who was sentenced to 14 years and three months as part of a previous trial (which concluded on Wednesday 1 May 2019).

Oldroyd and Simpson were at the highest level of their respective OCG’s and were convicted for conspiring together to supply cocaine on a number of occasions.

The court heard how Oldroyd’s gang were an extremely well organised team of criminals who would go to great lengths to conceal their criminality and minimise the chances of being exposed.

Their underhand tactics, which failed to stop them being detected by the SOCU, involved disposing of mobile phones, using messaging applications to communicate and regularly changing vehicles. Oldroyd alone was seen driving up to 17 different cars throughout the operation.

Oldroyd’s gang were involved in a plot to supply cocaine across the country including Warrington, Carlisle, Scunthorpe, Darlington, Manchester and London.

Each of the 14 men had a role to play to ensure Oldroyd’s criminal business was making, distributing and profiting from the drugs.

Lewis Johnson controlled a safe house on Liverpool Road in Warrington, which was rented by Oldroyd’s partner. The property was used by the group to congregate and deliver drugs, which were destined for areas such as Manchester where they would then be supplied to other organised crime gangs.

Oldroyd also did dealings with Paul Ferraiolo who is known for having close links with organised criminals in Merseyside.

On 16 April Oldroyd liaised with Ferraiolo to supply 1kg of cocaine to Islam Grana at a pub car park in Widnes. Grana was then instructed to transport the drugs towards the North East area of Middlesbrough. However, when Grana reached Halifax in West Yorkshire he was arrested after cocaine was recovered in a sports bag beneath the front passenger seat of the car he was driving. Ferraiolo and Grana’s DNA were found on the drawstring of the bag.

Videos on Grana’s mobile phone also showed he worked closely with Taulant Paja and proved that together with Oldroyd they had a drugs business, which was generating huge amounts of money.

During the investigation on 19 July 2018 police searched an address at Biggin Court in Warrington, where Oldroyd’s DNA was recovered. Inside the property cocaine with a street value of £125,760 was recovered along with drug mixing and cutting paraphernalia including scales, spray bottles, plastic packaging and gloves.

Moses Webber also found himself to be a trusted member of Oldroyd’s criminal enterprise, he visited the safe house and would assist in organising couriers to deliver a haul of cocaine to various parts of the country. On 15 February 2018 his role came to an end when he was stopped by officers who seized almost £1,000 from his possession.

“This operation has not only resulted in the largest haul of cocaine being seized in the history of Cheshire but also the largest national in land seizure.
“We have wiped out two organised crime groups, preventing them as well as other gangs from gaining extreme profits and in doing so have protected our communities along with vulnerable adults from criminals who bring with them intimidation, exploitation and violence.

“To transport such a colossal amount of cocaine you have got to be a confident, arrogant and greedy individual. Simpson has proved that he is exactly that and this is what led him to believe he could bring illegal drugs into Cheshire without being disrupted.

“Despite Oldroyd’s organised crime group going to great lengths to conceal their criminality and avoid being caught we were always going to be one step ahead. Let this be a warning to other organised criminals out there, Cheshire is and always will be, a very difficult place to operate.

63 year old man arrested on suspicion of murder after death of woman in...