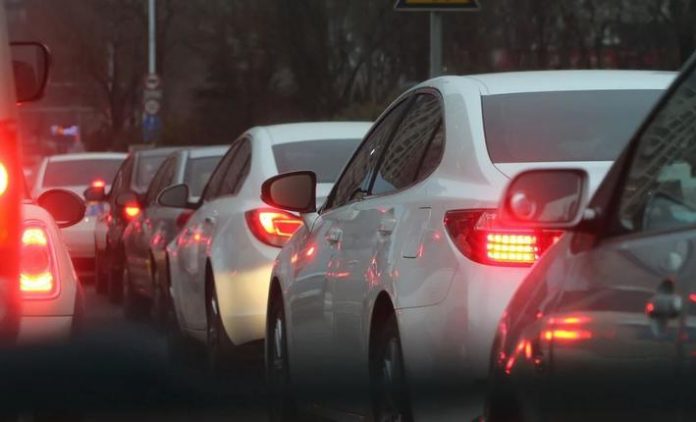 Scientists from Manchester Metropolitan University studied levels of nitrogen oxide (NO2) using real-time data provided by the network of almost 100 connected monitors, which were deployed just before lockdown measures were introduced.

These units have been installed in different locations across the city as part of a new partnership project between Manchester based Universities, Transport for Greater Manchester and AirSensa – a company specialising in air quality monitoring technology.

Nitrogen oxide is a toxic pollutant often associated with vehicle emissions and is known to cause severe health problems including inflammation of the lining of the lungs.

The team analysed pilot data from nine sensors at different sites and found that in the three week period before lockdown began at the end of March, six of those nine sites exceeded the recommended annual limits for NO2.

But three weeks into lockdown, four of these sites still exceeded this limit – showing that despite an overall drop in pollution, levels of NO2 may still be dangerously high in some areas.

Some of the biggest drops in NO2 were found in the Manchester Piccadilly area, which reported a 38% average drop in the pollutant three weeks into lockdown.

However, in other areas of the city, relatively low drops in NO2 were reported – in the region of just 10% in areas around the Mancunian Way – an elevated dual carriageway which is known for its heavy traffic and congestion.

Dr Sanja Potgieter-Vermaak, Senior Lecturer in Chemistry and Environmental Science at Manchester Metropolitan, said: “What we have observed is that NO2 has not decreased to safe levels in all areas.

“This is actually unsurprising as although we know that one of the main sources of urban nitrogen oxide pollution is transport, we also know that other sources, such as industry, residential and commercial gas and oil combustion, and urban geography, play a part.

“The decrease in heavy traffic has done an incredible job in reducing some of the city’s harmful pollution levels, as we have seen from the data, but we cannot ignore the bigger picture and other sources of harmful pollution.”

Dr David Megson, Senior Lecturer in Chemistry and Environmental Forensics, said: “During this lockdown event we have had the chance to learn about the importance of different sources of air pollution, including contributions of non-vehicle sources.

“This new information could have a direct impact in saving lives in the future and reducing deaths directly linked to poor air quality in our region as we can use this insight to implement more effective strategies to the improvement of air quality.

“I believe we can do this thanks to the high quality data produced by our air quality monitoring network and by working closely with our project partners, public bodies and policy makers.”

Manchester is known for being one of the worst cities in the UK for poor air quality, with dangerous levels of toxic pollutants having a devastating impact on the health of those living in the region.

In 2019, it was reported that air pollution was costing the regional economy up to £1bn annually and it is believed that more than 100 people die every year from toxic air in the city.

But, with the implementation of this new air pollution monitoring system, more localised data, on a scale never seen before in the city, will help people protect themselves from the effects of poor air quality by allowing them to avoid pollution hotspots.

The new network differs from the automatic air quality monitoring stations already in place in the city, which include just three monitors in Manchester’s centre and around 20 in total across the borough.

These stations publish data on NO2 and particulate matter (PM10) and other pollutants, on an hourly basis.

The AirSensa monitoring system, installed by Manchester Met, will not only give more real-time data, but also give details of relative humidity, temperature, ozone and particulate matter (PM2.5) concentrations.

The latter is an important pollutant to measure as it is so small that it can penetrate deep into the lungs and potentially cross the blood barrier, seriously affecting health.

Jonathan Steel, CEO of AirSensa, explains the aim of the project: “Our mission is to provide hyperlocal, real-time pollution monitoring across all large urban areas in Western Europe and the USA.

“We have chosen Manchester to pilot this project as it is the perfect city example with the right implementation partners in place.

“We are partnering with many Higher Education institutions but Manchester Metropolitan has a superb proactive business support system along with excellent subject experts, and it is great to be able to draw on this expertise.”

Future outputs of the collaboration are likely to include a suite of smart apps that will allow users to plan routes based on the best possible air quality to avoid hot spots, which will display on a map in real-time.

Partners will also be providing sensor data direct to schools and NHS facilities to help the sheltering of at risk children and patients.

Manchester secures £1.5m for ‘One bin to rule them all’ project to revolutionise plastic...

Pollution monitors are to be installed outside Bury schools