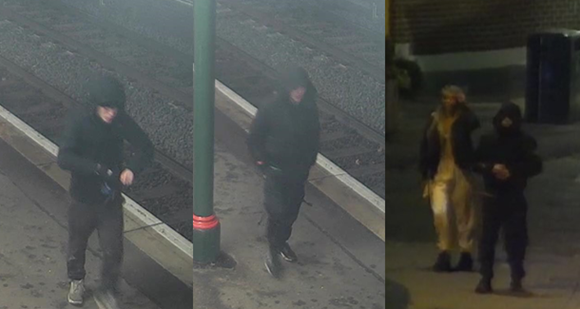 Police have issued images of three youths that they wish to speak to after a 22 year old man was stabbed in Hale.

The attack happened on Sunday 7 November at around 12:40am to Ashley Road.

The victim suffered a stab wounds to his stomach and legs. He was taken to hospital for treatment.

Officers have now released images of two males seen sat in Hale Railway station before the incident, described as white, aged between 15-17, one had curly hair, and they were approximately 5ft eight – 5ft 10 in height, of medium and skinny build, both wearing dark tracksuits.

A girl was also seen with them, aged 15-17 years old, wearing a light tracksuit with a dark jacket, with mid length hair.

Detective Constable Housley from GMP’s Trafford Disctrict, said: “This was a vicious, unprovoked attack on a young man, and it’s lucky that no-one was more seriously hurt.

“This kind of violent behaviour will not be tolerated, and we will continue to follow all lines of enquiry to ensure those responsible face the consequences of their actions.