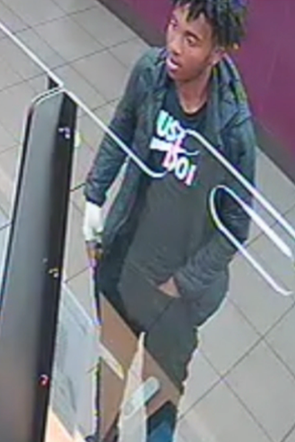 Greater Manchester Police have released a CCTV image of a person they would like to speak to in connection with a stabbing in East Didsbury back in August.

The incident which occurred on the 27th of August saw a 17-year-old boy stabbed in the chest by a group of four males at East Didsbury tram stop.

Earlier the group first approached a 16 year-old boy at Trafford Bar tram stop and threatened him with a knife before stealing his chain and his mobile phone.

Following this, they got onto the tram where they travelled to East Didsbury before approaching a second victim – the 17-year-old boy.

The group managed to grab the victim’s phone before stabbing him in the chest after he tried to escape from the situation.

The boy was taken to hospital with a stab wound. He has since been discharged.

Two individuals aged 14 and 15 have been arrested in relation to this incident and a third boy aged 15 has been charged.

Enquires remain ongoing and officers are keen to speak to the individual pictured.