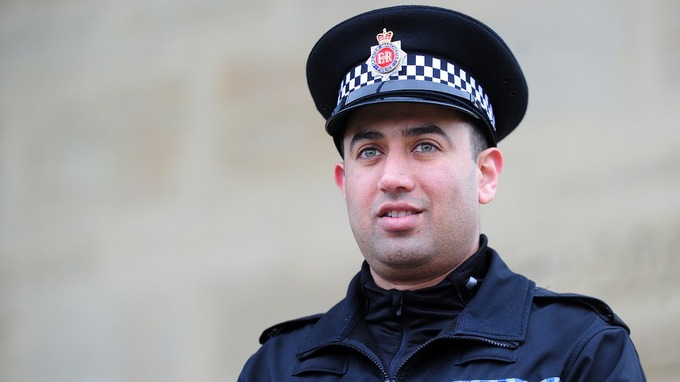 PC Mohammed Nadeem who single-handedly saved a man from an icy river has won a prestigious Police Bravery Award.

The officer was named as the Region 1 (North West) winner at the 23rd national Police Bravery Awards last night (Thursday 12 July), hosted by the Police Federation of England and Wales. The awards, sponsored by Police Mutual, honour and recognise police officers who perform outstanding acts of bravery.

PC Nadeem won the award after he jumped into a fast flowing river to save a drowning man back in February this year.

On seeing the distressed man struggling in the River Irwell, PC Nadeem jumped 8ft into the river and swam towards him. The brave officer was still wearing his heavy protective clothing, as there had been no time to take it off.

The man tried to swim away towards a dangerous weir, but PC Nadeem caught up, grabbed hold of him and dragged him to safety. Both men were treated by paramedics before being taken to hospital to receive further checks.

PC Nadeem was nicknamed ‘the Hoff’ by colleagues and friends for his heroic actions, prompting the real Hoff to tweet about it at the time. David Hasselhoff also sent a video message to the winning officer to be played at the ceremony.

PC Nadeem, who still works for Bury Division said: “I am very happy to get this award. Just being a nominee was a great feeling but actually winning is amazing and David Hasselhoff giving a video message about what I have done – that recognition is just brilliant.

“It’s an amazing feeling being here and knowing what officers have put themselves through. It’s something that I will never forget, being in a room with such heroes.”

GMP Deputy Chief Constable Ian Pilling said: “PC Nadeem should feel very proud of this award which is testament to an incredible act of bravery and a willingness to assist even when his own life was in danger. All of us at GMP are very proud of his actions and this award is fully deserved.”

Calum Macleod, Chair of the Police Federation of England and Wales, said: “The courage and professionalism shown by PC Nadeem went above and beyond the normal call of duty. He showed exceptional bravery, and thoroughly deserves to win this award. Thank you for your dedication to helping to keep the public safe”.