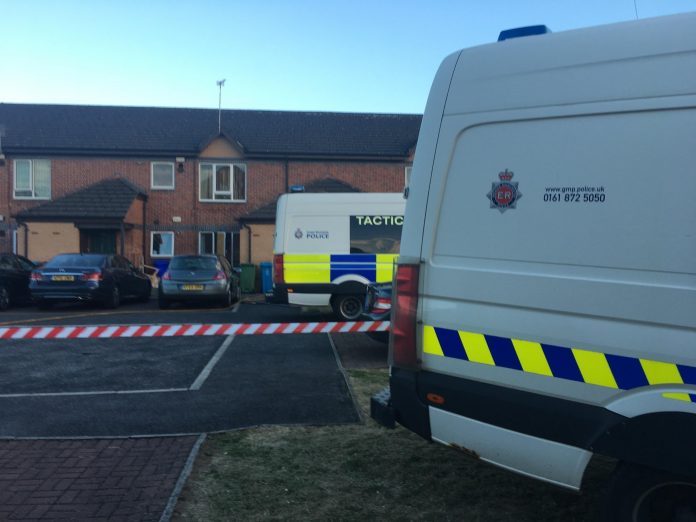 Police have revealed that they arrested a 23-year-old man on suspicion of possession with intent to supply Class A drugs in Wythenshawe. Also found at the address at Bryony Close was a quantity of cocaine and chemicals.

Whilst at the scene, one of the officers in attendance reported feeling unwell after inhaling chemical fumes. He was taken to hospital as a precaution before being discharged a couple of hours later.

The fire service subsequently carried out a thorough assessment of the chemicals and confirmed them to be ammonia and peroxide. They are not believed to be of any threat to people living in nearby properties.

The warrant was executed as part of ongoing work by GMP’s Challenger Manchester team, a specialised unit of detectives dedicated to tackling organised crime across Manchester.

Detective Chief Inspector Liam Boden, of GMP’s Challenger Manchester team, said: “The man we arrested last night remains in custody and will be questioned by detectives today as our enquiries continue.

“I know the large emergency services presence in the area will have caused some concern amongst local residents last night; however I would like to stress that the scene poses no threat to them or the rest of the community.

“One of the officers involved in the operation felt unwell at the scene so he went to hospital as a precautionary measure and I’m pleased to say that he was discharged later that night and is in good health.”