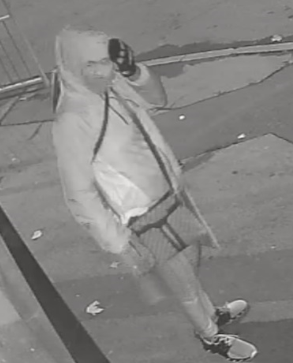 Police have released CCTV images of a man they want to speak to in connection with stabbing of a man in his 30’s yesterday in Manchester.

The stabbing happened yesterday on Princess Road, at the junction with Claremont Road in Manchester.

The victim attended hospital where he was met by officers.

Initial enquiries have established that the offender was unknown to the victim.

Detective Inspector Daniel Hadfield, of GMPs City of Manchester CID, said: “This appears to have been a random attack and enquiries are ongoing to locate the offender. The CCTV images are not the best quality but the suspect is quite distinctive in that he had a badminton/squash racket on his back.

“If anyone has seen this male either around the time of the incident yesterday morning, or in the hours leading up to it, please get in touch as you may be able to help us with our investigation.”

The victim remains in hospital in a stable condition.

Four men have been jailed after Eccles shooting